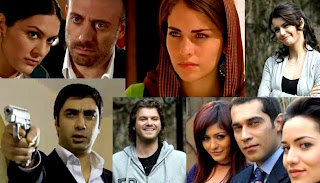 There is a new fashion in Greece. Almost every T.V. channel has a “Turkish Series”. Yes, you heard it right. Actually, it started about 5 years ago with “Yabanci Damat”. The story had some similarities with what I had. A Greek guy and a Turkish girl gets married. There are thousand things happens around them including problems etc. (this part is not similar)
Every time I was flying to Thessaloniki airport, the passport control officer was making the same stupid joke: “Aaa! You are Nazli!” I could not tell him directly what I thought: “No, God`s sake!” So, I had a fake smile on my face till I got back my passport.
After a couple of years, we got married and I moved to Thessaloniki. Then, silence. No trace of Turkish series. Last year suddenly, “A Thousand and One Night” was on air. There was a huge success in Greece and I became “Sehrazat”. They named me after every lead actresses with a big dark eyes. This year they show 3 series at the same time thus they are confused how to call my name. :)
Simply Turkish series are full of drama. Poor beautiful girl, rich man, pregnancy, mother has a cancer, father dies because his daughter makes a child out of marriage bla bla bla. How about Greek series? Very simple. A beautiful girl with a beautiful guy. They meet up somehow, having an affair. She discovers he has another girl friend. The other girl tries to separate them and always a gay friend who does funny stuff. Ah! By the way, 80% of the episode happens to be in bed, hugging, kissing, having sex.
OK, I need to admit that I am not a T.V. person. I lost that habit while I lived in dormitory during university. 1000 girls in a same building and only “one” T.V. Since then, I prefer to do other things like reading a book, writing short stories (trying to write actually) or just simply horse around.
Well, I am sure you are wondering what is the big deal? Did you read any of Constantine Kavafis` poems? He has some amazing poems and one of them says:
New lands you will not find, you will not find other seas.
The city will follow you. You will roam the same
streets. And you will age in the same neighborhoods;
in these same houses you will grow gray.
That is how I feel about it. I think “the city, the habits, the T.V. series” are following me!
Have a good day!
Posted by sonagre at 10:25 AM 5 comments:

Posted by Unknown at 8:20 AM No comments: