Problems with water? Call the Dutch!!!

New Orleans' levee fortifications and Dubai's prestigious island project appear to have little in common, until you realise that both rely on Dutch water management expertise. Today's World Water Day reminds us of the importance of handling water masses.
The theme of World Water Day, which is being held in Cape Town, is Water for Cities.

Deltas
More than half the world's population lives in cities. Many of these are below sea level, and hence vulnerable to the effects of climate change, mostly flooding.
The Dutch know what it means to live in a delta - in their case, the confluence of the Rhine, Schelde and Meuse rivers which all flow into the North Sea in the southwest of the country. The Dutch experience has bred generations of experts, and Dutch experts today are helping solve water problems all over the world. They are involved in an estimated 40 percent of all water projects worldwide.
In the Netherlands there are over 2000 companies, research institutes and government offices which are specialised in water-related subjects. They employ 80,000 people who guarantee a turnover of billions of euros. After all, one third of the country is below sea level, so it's no surprise that Dutch history has been shaped by the need to keep the water out.

Tragedy
The great flood of 1953, vividly remembered to this day, killed 1830 people and scores more in neighbouring countries. Over 70,000 people become homeless. The tragedy ultimately led to the Delta Project, with barrages and dikes built to protect the estuaries of the delta in the southwestern Netherlands. It has been called one of the most revolutionary hydrological projects in the world.
The knowledge gathered in the Netherlands is applied at projects like Water Mondial, involving Mozambique, Egypt, Indonesia, Bangladesh and Vietnam. 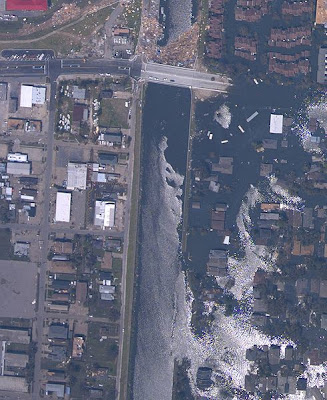 When the levee broke - New Orleans, 2005
Photo: Wikimedia
Katrina
The US city of New Orleans was hit by Hurricane Katrina in 2005, leading to widespread loss of life and enormous damage. Dutch technology is being used to reinforce levees and build storm barriers.
Dutch companies are also involved in the world's biggest dredging project called "The World", consisting of 300 artifical islands to be built off the Dubai coast, depicting the world. The project has been suspended because of the financial crisis.

A Dutch technique for purifying sewage water is being used in Australia, the United States and China. The method involves a special design of hydraulic tank.
And you can't catch them young enough: three Dutch schoolchildren developed a pump which does not just dispense water, but desinfects it, and the jerrycans, when it operates. The pump is being tested in Ghana.

Crown prince
Crown Prince Willem Alexander is representing the Netherlands at the World Water event in South Africa. He said he hopes that World Water Day will make people more aware of water-related problems.
What such awareness can achieve, is illustrated by a few simple figures: the Dutch population has grown by 11 percent since 1990, but water use in that same period increaded by just 1 percent. In 1990 each Dutch citizen used 131 litres per year; by 2009 that had gone down to 119 litres.

Posted by Gauri Gharpure at 1:08 PM

In the face of global warming and rising sea-levels I sometimes seriously consider moving to the Netherlands.

No joke. I figure if anyone can deal with the challenge it'll be the Dutch. After all, they've been managing to live below sea level quite well for centuries now ...