Rise and fall of the Krakers 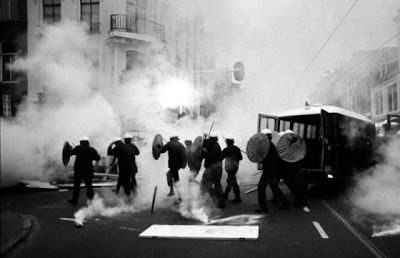 Common picture in the early 80s, violence at the removal of squatters

Thirty years ago a group of anarchists, mostly students, called krakers (squatters) set the social tone in Dutch society, especially in the Dutch capital, Amsterdam. The aim was to occupy empty properties. In 1980, at the coronation of Queen Beatrix, riots took place in the city center. It always has been a controversial subject, because of the lack of houses compared to the demand.

On the 1st of October a law will be active, which forbids squatting. The punishment for breaking the law (or property, so to say) will be one year of detention, or two when resisting clearing the property.

Doing some investigation on the subject, it seriously struck me that about 10% of the world's population is currently squatting. In most of the countries it is illegal, but still, if you think of the building of houses on plots of others, or on public property, it suddenly is more realistic.

So in the next couple of years either the jails will be inhabited by punkers and alternative students or there will remain a form of tolerance? 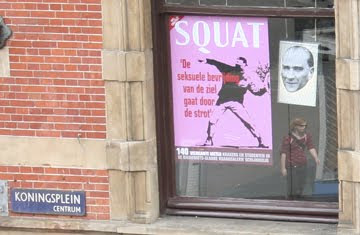 No, this picture has not been photoshopped!

Meanwhile, oldfashioned peaceful protests returned within Dutch society. Last weekend a group of squatters put up their tents and had a sleepover in front of the National Monument in the center of Amsterdam...

Is this law the end of a period of domestic terrorism or of a cultural legacy?
Posted by Osman Gürbüz at 10:07 PM 6 comments:

Posted by Unknown at 4:23 PM No comments:

Last week visitors of two art galleries and the art galleries themselves were attacked here in Istanbul by a mob. It doesn't matter anymore which motives were behind these attacks. That's guessing, nothing more nothing less. But the Current AKP government is pollitically responsible for it, and they have to make some conclusions. And the sad fact is: Istanbul is still Capital of Culture 2010; plain and simple.


Most columnists in Turkey wrote about it, you can read some of them here, here and here. They blame the Islamists, the National Islamists, the nationalists etc. In the end, it were Turks attacking Turks and foreigners. But it doesn’t matter who and what. What matters is that the attackers are still free. And the fact that the French, Dutch and German newspapers published it online before the Turkish did, shows a trend of denial. How much damage is done in terms of PR? A lot. But who cares as long as the current government clouds the masses with all kind of political and economical propaganda?! And the more you talk about it and blame 'the other' the more damage will be created for Turkey as an intolerant country regarding religion, nationality and ethnicity.
Posted by Unknown at 12:08 AM 5 comments: