Battle of the tongues 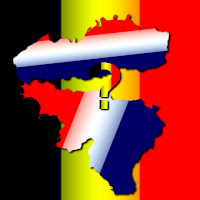 Governments all over the world collapse swiftly these days. In the past 8 years The Netherlands has had 4 consecutive governments, led by the same PM, (almost) none of which finished the regular 4 years until the next elections. Italy of course is champion of failing cabinets, with more than 50 turnovers since WW2.

This blog is not about the countries above, it's about the deeply divided Western European country, located centrally in Europe, housing the beating heart of the European Union: Belgium. Actually, this federal state contains three parts, the northern part which is Dutch speaking, called Flanders (Vlaanderen), the southern part, Wallonia, which is French speaking and caught up in the center of the country there's Brussels, surrendered by a periphery of Dutch speaking towns and villages, called Brussel-Halle-Vilvoorde (BHV). Brussels is French, the suburbs are Dutch.

This week the Belgian national government led by Yves Leterme, fell, after a period of five months. Usually governments are blown up because of economic or political reasons, but in this case it's the language that caused the situation. Although, as they say it is. The underlying reason is that Flanders is feeling drawn back by Wallonia, an economic weak region with higher unemployment rates than in Flanders, where most economic activity is concentrated. This means that a large part of federal money is being pumped in the poorer south. Especially the Flanders nationalist party, led by Filip de Winter, is opposing this and wants to make Flanders an independent state. He quoted earlier this week that Wallonia should suffocate, he doesn't want to invest one Euro in Wallonia anymore...
In the meantime, the BHV region is anxiously protecting it's linguistic advantage of Dutch as the official language. French speaking local municipal officials are forced to speak Dutch only. Committees have been set up to check if this protocol is being followed, protest groups are demanding that the law stays unchanged.

How will Belgium look like 10 years from now? Is the country still struggling for a unstable future? Will Flemish and Walloons have signed peace and are they working on a new combined language ('Walmish', 'Flemoons')? Or has the EU embraced two new member states (with Turkey still in the waiting room)? My crystal ball is blurred, so I can't tell you. Meanwhile I find it an enrichment that Belgian kids are learning (at least) two languages at school. An example for multicultural, multilingual Europe.
Posted by Osman Gürbüz at 8:40 PM 1 comment:

Early Sunday morning, Barcelona
Posted by Unknown at 7:33 AM No comments:

Keep on slogging through

I've been remiss again. I was doing drugs and alcohol and having sex with young priests when I should have been at my post, protecting the world from people like me.

That's right, ladies and gentlemen. I'm a closet Republican. I have a poster of Mitch McConnell on the underside of my crapper lid. I make crude jokes about Biraq Obama's picanninnies with much the same verve as I did about former U.S. First Idiot George Fubar Bush's drunken twins, Regan and Cordelia. You heard the one about what they were doing in the bunker in Culpepper, Virginia in the early hours of the morning on September 11, 2001? Really? God, I have to get a better grip on search engine optimization.

The truth is I'm participating in Script Frenzy, which has completely consumed all the time I had set aside on my Tuesdays After Lunch for April. I'm just not as good a typewriter as I was in my late fifties. In fact, I'm turning into a dead thing at an alarming rate. If the current acceleration of decline in my physical health continues, I won't last out this century.

I find this prospect depressing. I really dreamed that I would be able to tread water with the rest of the world's 10 billion idiots as the imaginary effects of Democrat-induced global warning (which business leaders prefer to call climate change to make people blame it on panhandlers and other left-wing agitators), but my doctor recently told me that if I didn't start taking better care of myself, he wouldn't give me another 50 years. What a bummer.
Posted by Doctor Faustroll at 3:48 AM 1 comment: