Today we took the train from Milan to Paris, a wonderful trip of only 7 hrs.
Paris is as usual beautiful on this typical May day in Spring; the cafe's, and there are a lot of them, are open with terraces.
We arrived at our hotel at 4pm and what is in front of the hotel? Kebab D'anatolia...
O. wants to go shopping at the Champs-Élysées...she will discover that you don't shop there unless you can afford to drive a Rolls Royce..)!
We go swalking and sight seeing and eat a lot of French Cheese...later more.
Posted by Unknown at 6:08 PM 5 comments:

The ethical code of the Taliban, how to threat a woman

A Dutch journalist says she was raped several times by the Taliban commander who held her hostage in 2008.

The journalist, Joanie de Rijke (43), was held hostage by the Taliban for six days in November 2008 and was released after a 137,000-dollar ransom was paid.

In a new book, In the hands of the Taliban, De Rijke describes how she was repeatedly raped by Taliban commander Ghazi Gul. Gul was later killed in a bombardment.

De Rijke, who is Dutch but lives in Belgium, was on assignment in Afghanistan for the Belgian weekly P-Magazine. She wanted to talk to the group of Taliban fighters who had ambushed and killed ten French paratroopers in August 2008. But when she made contact with the group, they took her and her Afghan interpreter hostage instead.

The ransom was paid by the magazine and colleagues of De Rijke after both the Dutch and Belgian governments refused to pay.
Posted by Unknown at 1:30 PM 1 comment:

Have The Courage To Live, Anyone Can Die 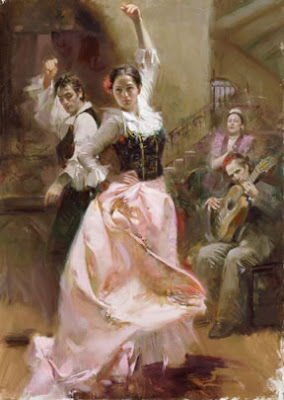 "Dancing in Barcelona" by Pino.
(Especially for Claudia, Valerie and Martin)
Posted by Sandra Singh at 12:09 AM 4 comments: