Yesterday, I told Ozlem, my wife, that today’s elections for municipalities, which is seen as general elections in Turkey, the leading AKP party will fail to get more than 40% of the votes. My predictions of this morning which I wrote down, but could not publish due to a failed I-net connection, is below:
AKP: 38%
CHP: 16%
MHP: 11%
DSP: 7%
DTP: 11%
SP: 5%
BBP: 3% (sympathy votes)
Other: 8%
Trend watching is an important semi-science within communication management, but often not taken seriously. Early indicators of tonight, I am writing this here down at 08.30pm, looks like that the AKP is not doing well. But the CHP is still a party which can not lead the opposition against the AKP. What would happen if the CHP leader, D. Baykal, was not their party leader anymore?
Posted by Unknown at 8:58 PM No comments:

As gender roles have shifted in society and in many religions, most Christians are re-evaluating their historic positions. Over the last 50 years Christian egalitarians have increasingly argued for equal roles for men and women in marriage, as well as for the ordination of women to the clergy.
Beyond generally accepted social standards which are continually shifting, Christianity sets a moral standard—the attitudes toward and treatment of women by Jesus. There is no recorded instance where Jesus disgraces, belittles, reproaches, or stereotypes a woman. Examples of the manner of Jesus are instructive for inferring his attitudes toward women and show repeatedly how he liberated and affirmed women.
The Christian doctrine of the Trinity has become a major focus of this contemporary gender debate. In 1977, George W. Knight III argued in a book about gender roles that the subordination of women to men is theologically analogous to the subordination of the Son to the Father in the Trinity. The current pope strongly condems all violence against women: "disturbing is the crushing yoke of discrimination that women and girls so often endure, not to mention the unspeakable practice of sexual violence and exploitation which causes such humiliation and trauma," Benedict told an audience of government leaders and foreign diplomats this week in Angola and mentioned that especially in the USA, where many clergy abused women and children in the past, needs more investigations.

In Judaism, the past 30 years, have seen a revolution in how reform Judaism views women as well. Judaism now believes in the equality of men and women. The reform movement rejects the idea that halakha (Jewish law and tradition) is the sole legitimate form of Jewish decision making, and holds that Jews can and must consider their conscience and the ethical principles of Judaism when deciding upon a right course of action.

However, the status of women and for example their testimony in Islam is still disputed. Some jurists have held that certain types of testimony by women will not be accepted. In other cases, the testimony of two women can equal that of one man ( although Quran says 2 women and 2 male are needed but if a male cannot find another male he may carry this testimony out himself). The reason for this disparity has been explained in various manners, including women's lack of intelligence, women's temperament and sphere of interest...and sparing women from the burden of testifying... but more worrysome, the Qur'an has left open its quantity, nature, and other related affairs to be defined by social custom and tradition. See here the current problems. And now I refer to an article about an Imam in Bosnie who raped a your girl. Read it herreeee

Moral: where sexual abuse and voilence against women in religious circles are discussed and condemned, most of the Imams worldwide don't want an open discussion on the matters!
Posted by Unknown at 9:00 AM 2 comments: 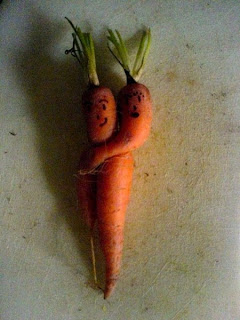 A friend of mine found these carrots between her groceries...
Posted by Eva at 1:00 AM 4 comments: