Independent for one day.

Ruthenia was once independent...for one day. On March 15th, today exactly seventy years ago, it enjoyed its sole day of independence. Declared in the morning and snuffed out in the evening by an invasion from neighboring Hungary. Ruthenians have had little joy since. Maybe the only famous Ruthenian, Andy Warhol, once said: 'I come from nowhere'...
Posted by Unknown at 1:40 PM 2 comments:

Think twice when you want to attend a mass or sermon in your neighborhood.
I love this picture, made in Pakistan, published on Brianca her blog...
Posted by Unknown at 10:00 AM No comments:

Immigrants families from Morocco and Turkey suspect of fraud

The Dutch social benefits authority SVB is tightening controls on Dutch-Moroccan and Dutch-Turkish families with children who live on their own in their country of origin. Families of children aged between 12 and 17 in the Netherlands can claim nearly 280 euros a quarter in child benefit. (up to 700 YTL every three months) If the child lives independently in another country, the parents may still be entitled to claim benefit. And providing their child is living abroad specifically to study and does not have earnings above a given threshold, the parents can claim double the amount of benefit to make up for their extra maintenance expenses. The regulations apply to EU countries, and also other countries that have signed a cooperation agreement with the Netherlands, which include Morocco and Turkey. Random checks have shown that the claims of 54 percent of Moroccan families with children abroad were suspect, as were those of 31 percent of Turkish families. An SVB spokesperson told press agency Novum that the fraud includes families claiming a child lives independently in Turkey or Morocco, when in fact they live with family. SVB will now intensify its checks on families claiming benefit for children studying in Turkey or Morocco.
Posted by Unknown at 4:00 AM 2 comments: 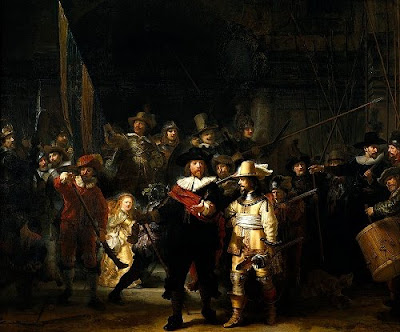 "Nightwatch" by Rembrandt.
Posted by Sandra Singh at 12:07 AM No comments: