Still alive, since the bombing in Egypt took place in Cairo and not in El Quseir where we were.

This El Quseir was a dusty shit hole with too many street dogs and lazy men sitting around. My sister and I didn't dare to walk in, but what we've seen of it wasn't up for much. Cracked, dirty houses (from the outside) and trash laying all over the place. The vegetables from the market had feeble leaves, the banana's were half rotten and there were no women to be found on the streets.

Getting things done in Egypt turned out to be a real problem. And I know problem after some of my trips!

It started already in the airport where Achmed from the travel agency got angry with me for buying my visa at the bank for 15 dollars and not with him for $25.

The hotel was fair enough but 8 kilometres away from everything, so we were forced to stay at one spot. Taking a taxi? "That will cost you ten dollars per person one way, madam."

Although temperatures were between 20 and 25 degrees Celcius, the wind made things a bit chilly and the whole reason why we went to Egypt in the first place almost impossible: diving.

After some difficulties, we got things done and overall I've had a good break from my long days studying. But it wasn't easy. Anyway, it gave me enough reason to write.

Not nice, not wise, and none of their business!
The European Parliament's rapporteur on Turkey, Ria Oomen-Ruijten, has said Armenian lobbyists have threatened to destroy her career because she has refused to refer to the World War I-era killings of Anatolian Armenians by the Ottoman Empire as "genocide."

The Dutch Christian Democrat, whose report on Turkey was approved with a record 65 votes against only four votes in opposition and one abstention in the Committee on Foreign Affairs on Feb. 12, said the Armenians have told her that they will do their best to prevent her re-election to the European Parliament.
Oomen-Ruijten, one of the most senior members of the European Parliament, has been hailed for her balanced reports on Turkey in recent years. Despite enormous pressure from the Armenian lobby, Oomen-Ruijten has so far refused to refer to the 1915 events as "genocide." Her predecessor as the rapporteur on Turkey, Camiel Eurlings, who was also a Dutch Christian Democrat, was heavily criticized for being too pro-Armenian and for authoring biased reports on Turkey. Oomen-Ruijten, who is expected to run for a European Parliament seat again in June, will defend her report in a plenary session on March 11. The report is expected to win the approval of the European Parliament without any major changes.
Continue reading herrreee
Posted by Unknown at 3:03 PM 2 comments:

Medicine and religion share at least one trait, both can be seen as response to the prospects of death.
Posted by Unknown at 11:19 AM 6 comments: 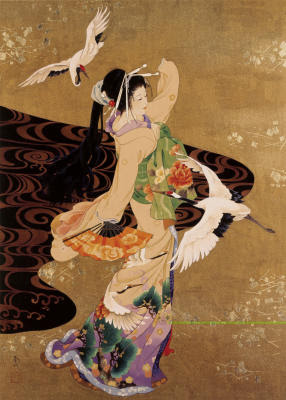 "Dance of Cranes" by Haruyo Morita.
Posted by Sandra Singh at 12:03 AM 3 comments: