Turkish Airlines had not an accident in six years before today’s crash. The last time that one of the airline’s planes crashed was in January 2003 when an Avro RJ100 crashed during a domestic flight from Istanbul to Diyarbakir. 75 of the 80 passengers were killed.
But Turkish Airlines had a number of accidents in the previous years. The airline got a bad reputation with regard to safety. The website Airsafe.com keeps track of all modern-day civil aviation accidents worldwide and figures from the site indicate that Turkish Airlines has one of the highest accident rates in Europe. Scroll all the way down.
According the site (after quick investigations by Dutch newspapers), Turkish Airlines tops the Crash list in Europe and belongs to the top-5 worldwide.
Airsafe.com looks after each airline company their accidents and compares it with the total of deaths by crash related to the total amount of flights. Not one European airliner comes above the score of 1.0, but Turkish Airlines ranks 3.58. And this number was that of yesterday. BA has a score of 0.22, KLM of 0.88. So you are more likely to crash with a Turkish Airlines flight.
Next time, perception or not, the better service of Turkish airlines or not, KLM will be my carrier, at least for the time being.
Posted by Unknown at 8:05 PM 6 comments:

A Turkish Airlines passenger plane from Istanbul with 135 people on board has crashed near Amsterdam's Schiphol airport this morning. It was a TYA flight departed this morning 07.55am from Istanbul.
The Boeing 737, which appears to have only just missed the landing runway, has broken into three parts, but is said not to be on fire. I just got the news through twitter.
There are confirmed reports of 9 dead, including the 3 crew members in the cockpit.
Weird was that a couple of minutes after the crash, people started to make phone calls.
I prefer Turkish Airlines over Royal Dutch KLM, and will continue doing so...
As far as I know, no close connections of me in this flight, but you never know.
Update: 9 dead, 50 injured of 25 severely injured.
It was annoying to see, until the very last moment, that the Turkish authorities was denying that there were casualities. This is also a traumatic experience of the survivors.
Update; yes, a friend, his wife and daughter were on the plane, but safe.
Update: 84 injured, 6 critical
Update: Turkish daily Hurriyet and Turkish government take their fight over the dead bodies to another level: accusing each other for misinformation. Guess what: f'ck you idiots!
Livestream here, in Dutch.
Posted by Unknown at 2:09 PM 7 comments:

The ruling of the ECJ in favor of Turkish business people

Below you will find an article called: '70 million Turkish businessmen' rejoice.
Last week the European Court of Justice ruled in favor of two Turkish truck drivers; EU countries have no right to implement new rulings against Turkish 'service providers' when entering the EU based upon an agreement between Turkey and then the EEC, the forerunner of the EU in 1970.
There are four points which are not mentioned:
1) Restrictions made prior to the 1970 agreement are still there.
2) The EU asked Turkey to sign a non-participation agreement so that third-parties (individuals of other countries - read: Iran, Iraq, Syria etc. - ) can not use the same reasons as Turks to enter one of the EU countries through Turkey. Turkey refused to do so, and therefore the EU afraid of an influx of refugees keep the borders tight with Turkey.
3) I never experienced that an application for visa of a Turkish business person was denied.
4) Every time when a Turkish citizen wants to leave the country, he/she has to pay 15 YTL at the airport (was 50 USD until 2 years ago). When Turkish business people can show their government that their business abroad is sustainable, they have to pay only once this taxs, but it still difficult to proof for it, especially Small and Medium size companies. Most Turks experience this as needless control, and harrasment.

The global financial crisis has hit Turkey hard. Just as in the United States and Europe, job losses are the order of the day. But in spite of it all, the Turks still have something to celebrate. For the European Court of Justice has ruled in favour of two Turkish plaintiffs who were sick of having to move heaven and earth in order to obtain a visa to travel to an EU country.
The press is jubilant and the business community has immediately called for assurances that this verdict not be allowed to disappear into the back of a drawer. As they see it, the Turkish government should immediately enter into negotiations with the EU's member states to ensure that the verdict has tangible consequences.
Continue reading herrreee 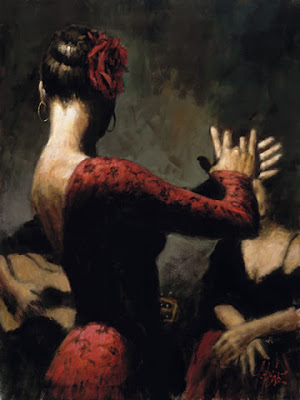 "Tablado Flamenco" by Fabian Perez.
Posted by Sandra Singh at 12:07 AM No comments: