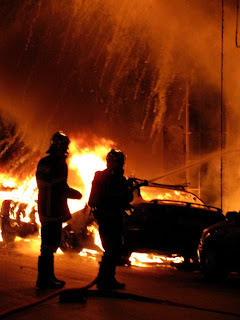 Firefighters putting out Fires in Monastiraki 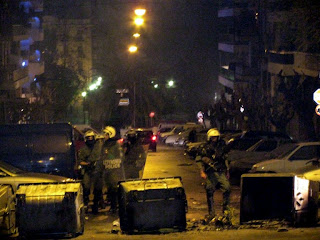 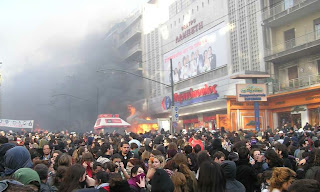 Protesters on Alaexandras
Posted by Vassili - Mike at 10:46 AM 5 comments:

Transparency International HELLAS blames corruption as cause of riots

Transparency International Hellas has laid the blame for the riots at the feet of the level of corruption that exist in Greece. When it comes to corruption, Greece comes in at the Top 5 in Europe. (not on the good end). In 2008 Greece ranked 57, worse of than South Africa (54) or Botswana (36). I mention these two countries because many in Greece constantly put down African countries.

In its press release Transparency International claims that the youth especially have a belief that laws are not being enforced, that no one takes any responsibility, that the education system is sick. It also states that not only is corruption instilled as an everyday fact of life but that it has also become part of the tradition of life.

I am not trying to justify the rioters, but Governments and those with power have to take responsibility for their actions.
When the lawyer of the policeman who fired the shot, comes out before the coroners inquest and declares that the death was a result of a ricochet,
When the lawyer continues and says that in time we will see if the youth should or should not have been shot,
When the policeman were not placed in immediate custody,
When the lawyer for the policeman says that he had to take on the case pro-bono because the previous lawyer asked for a certain 'sum' to be placed in her bank account to get a favourable hearing,

Well you can see why the family of the deceased youth hired their own doctor to witness the autopsy,
You can also understand why people think that corruption is so widespread, and these inflamatory remarks came out recently, after the bulk of the rioting had been done.

Corruption has become so commonplace that no one is ashamed of asking for a bribe, doctors ask it outright, people ask each other, how much did you pay for your degree. And of course this state of affairs would eventually spill out one way or another.

But of course its the little guy who gets hurt, the villas and the shops of the elite are still fine, the poor shop owners took the brunt, the police took a beating as they were ordered by the government to stand by and watch. And in the end, me and a few other guys in greece - the only taxpayers are left to foot the bill for all this.
Posted by Vassili - Mike at 10:40 AM 2 comments:

Far right threat is often ignored in the Netherlands

A gang of youths harassed a Liberian family to such an extent that they were forced to leave the southern town Waspik.

There is a tendency in the Netherlands which blames Islam for most of the problems the country faces today. Below a more nuanced article about the extreme right groups in the Netherlands. Although they are marginalized, they still have a voice through the populist PVV.
The article is a back ground one, and an opinion. At least we can make the problems the Netherlands face disputable, in contrary with Turkey which became more intolerant against other people their religions, ethnicity or simple roots. Read that here.

The Dutch government’s efforts to monitor radicalism in the Netherlands have been focused primarily on potential Muslim terrorists. But this could favour extreme right-wing organisations whose numbers have gone up significantly during the last few years.

Being a Muslim in the Netherlands means always having to be wary. Ordering a halal meal on a transatlantic flight, refusing to shake hands with a woman or growing a beard is enough to arouse suspicion. Could this be a terrorist?
The Dutch government favours a broad approach in its battle against radicalism, says Bob de Graaff, one of the authors of the eighth edition of the annual Racism and Extremism Monitor published by the Anne Frank Foundation and Leiden University on Tuesday. It is not just the small terrorist sleeper cells which are being monitored. A much larger group of Muslims who might possibly turn to radicalism is also under scrutiny.

And there is more herreeee

Salvador Dali
The Average Fine and Invisible Harp
1932. Oil on panel, 16 x 21 cm.
Private Collection
"At the age of six I wanted to be a cook. At seven I wanted to be Napaleon. and my ambition has been growing steadily ever since." Salvador Dali, In "The word of Salvador Dali", Macmillan, 1962.
Posted by Unknown at 1:45 AM No comments: