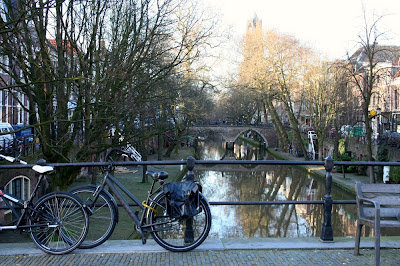 Bike parked at the Oude Gracht, the main canal in Utrecht. Picture from own collection

In Holland there is a flourishing circulation system in bikes. One gets stolen; another is bought for a few euros from a shabby looking guy.

You can try to avoid this system and bolt your bike with at least two locks. But when you take the risk, it's likely you're pulled into this system sooner then you want to. On forehand you already think: “I should lock this bike better, but I’ll take the risk.” A few hours later you find yourself cursing and blaming for not listening to that tiny voice in the back of your head. The bike is gone without a trace and no one has seen a thing.

For a few days or maybe even weeks you keep an eye on every bike there is. But it’s not worth it. There are so many bikes scattered around the city that it’s a waste of time and energy. That bike is gone. Reporting the theft is no use because often it’s a bicycle alike so many. And honestly: it was one bought cheap, found somewhere, never returned or patched up so not really worth the effort anyway.

Now it’s time for a good one, to make a fresh start. One with lights that work, with decent breaks and a saddle that’s comfortable; but second hand since life is expensive enough already. After some nose about you’ve found a nice bike for a reasonable price. “Can I come back tomorrow to pick it up?” You ask the shopkeeper. "No problem," he replies.

With money in the pocket you walk up to the shop, excited to buy a new vehicle that gets you on the roll again since bikes are indispensable here. Only two metres before the entrance of the shop a chap comes up to you. “Do you want to buy a bicycle? Ten euros!” One second you hesitate. It's tempting since this is probably what happened to your previous bike and way less money than you're going to buy. But also knowing how someone else is feeling soon. With a last glance at the stolen bike you step into the shop, saying no to the crook and knowing that this is the Dutch bike circulation system.
Posted by Eva at 6:39 PM 2 comments:

A big blow for Bulgaria when it loses €520m EU funds

Bulgaria has lost €520m ($677m) of European Union funding for failing to crack down on fraud and corruption among officials appointed by the Socialist-led coalition government, the first time the European Commission has stripped a member state of funds in this way.
The EC said on Tuesday it would not renew the accreditation of two government agencies responsible for disbursing EU funds which have been under investigation by Olaf, the EU’s anti-fraud agency.

As a result Bulgaria – the EU’s poorest member-state – will lose €220m of pre-accession funding that still had to be allocated. The government will have to use funds from the budget to cover another €300m worth of contracts that were frozen by the Commission last July because of suspected fraud.

And there is morreeee
Posted by Unknown at 10:45 AM 2 comments:

Some interesting facts about the Fall of Constantinople

The Fall of Constantinople refers to the battle where the Byzantine Empire lost the city of Constantinople and all of their shiny trinkets to the Ottoman Empire, bringing an end to the millennium-or-so-long Byzantine rule of the area, and also made for a great movie plot line and a successful line of action figures. The Ottomans rebuilt the city after the siege and invited the original denizens to move back, but they declined the offer, the most likely reason being either that they did not like the Turkish curtains that the Ottomans installed or they thought the Ottomans smelled bad. All of the Greek scholars who once made their home in Constantinople moved to Italy, taking their vast book collection and recipe for flat bread — the predecessor to pizza and all of its deliciousness — with them. Eventually, people did come back to the city after Mehmed placed a sign that said "Free beer inside" at the gate to the city.
Consequences.
Far from being the grand and magnificent city it once was, Constantinople was ravaged heavily by the bubonic plague and especially from being sacked during the Fourth Crusade just two centuries earlier. By the 15th century, Constantinople was nothing more than a few walled villages separated by large expanses of fields, and most of the fields were being eaten away by rabbits that were now running amok in the city. When the Ottoman army made it into the walls, they killed, cooked, and ate all the rabbits, and as an expression of gratitude, many of the villages gave themselves up willingly to the invaders.
Since he was the new ruler of Constantinople, Mehmed II believed that he was the new Roman Emperor. He named himself "Kayzer-i Rum", Turkish for "Roman Emperor Am I", but due to trademark disputes, he was nicknamed simply as "the Conqueror". Constantinople became the new capitol of the Ottoman Empire, but they renamed the city "Istanbul", as they believed it was more catchy and had more 'zing' than "Constantinople". Even though the Greek Orthodox Church remained intact, Hagia Sophia was converted into a mosque, and they replaced all the pictures of Jesus with cartoon pictures of Mohammed. This change of sponsors is now considered a poor marketing move by academics all around the world!
Many of the inhabitants fled the city and sailed to the Latin West, bringing with them Greek knowledge, literature, philosophy, and the recipe for flat bread. Within the next hundred years, the flat bread evolved and became the delicacy known as the sushi pizza.
Posted by Unknown at 6:30 AM 2 comments:

Posted by Unknown at 1:00 AM No comments: