"Both the film Fitna by Geert Wilders as well as the book Mein Kampf by Adolf Hitler are based on one-sided opinions,” the book, produced by the Day of Respect Foundation, says.
The foundation, which aims to promote respect among youngsters, has sent the book to two thousand primary schools in the run-up to the Day of Respect on November 13.
Wilders' anti-Islam film Fitna was launched in March and generated widespread protests in many Muslim countries.

PVV member of parliament Martin Bosma has called for the books to be recalled, saying he objects to "children as young as ten being used for political indoctrination".
The foundation's director Corinne Biermans said it had not been the intention of the book to compare Fitna with Mein Kampf. She said she apologised if people felt offended by the awkward phrasing but that there are no plans to withdraw the book and no schools have complained.
Posted by Unknown at 8:00 PM No comments:

If the world could vote: Global Electoral College

...then only Iraq, Cuba, Congo and Algeria would vote McCain...
More herrreeee
Posted by Unknown at 2:45 PM 1 comment:

This is the last map how FiveThirtyEight.com predict the outcome of the Presidential elections.
With its sophisticated way of polling, this site showed already early May that Obama would be the Democratic nominee. And until so far, they are pretty accurate.
It gives McCain 1.9% chance to win the elections.

This morning Pollster.com gave 273 EV (safe) for Obama; the Democrats don't even have to win in states like Ohio, Virginia, Florida etc. See here their chart.
Last polling by Zogby, 11 - 4 - 08 (this morning released):
The final tally now stands at 54.1% for Obama compared to 42.7% for McCain.
Only a miracle can help John McCain (and of course: fraud, lawsuits etc.)
Posted by Unknown at 2:00 PM No comments:

How nasty the GOP can be...

Perhaps the most ill-timed press release of the 2008 campaign arrived shortly after 1:30 p.m. yesterday local time (-8 GMT), sent by the Republican National Committee.

The release forwarded word that the California Republican Party filed a complaint with the Federal Election Commission, in part because of a visit Sen. Barack Obama made to his dying grandmother.
"Obama for America violated federal law by converting its campaign funds to Senator Obama's personal use," the release stated. "Senator Obama recently traveled to Hawaii to visit his sick grandmother. This was the right thing for any grandson to do -- at his own expense -- but it was not travel that his campaign may fund."
At issue was whether the trip should have been paid for with campaign funds, based on the law that forbids candidates from using such funds to pay for personal travel. The Obama campaign said the trip had been vetted with lawyers beforehand and was allowable. The Republicans argued that, because Obama did not campaign during the quick journey to Hawaii, it should not have been a campaign expense.

But filing the complaint today now seems to have been ill-advised, if not legally, then certainly politically.
Obama and his sister released a statement this afternoon announcing that their grandmother, Madelyn Dunham, died peacefully after a battle with cancer.
Posted by Unknown at 2:30 AM 2 comments:

Paintings in Movies: The DaVinci Code

The Last Supper by Leonardo DaVinci 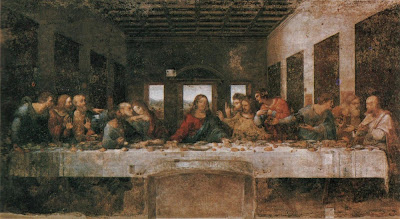 The movie is based on Dan Brown's best seller The DaVinci Code. In both the book and the movie the painting is mentioned.
Posted by Eva at 1:00 AM No comments: