The future with Obama...

For years foreign security agencies have been recruiting informants in the Netherlands without the Dutch secret service being able to expose them. The case of two police officers from Rotterdam who are suspected of working for the Moroccan secret service is the first to actually result in any action.

Parliament took advantage of the Rotterdam affair and that of the imams to warn Morocco that its diplomatic relationship with the Netherlands could be jeopardised if interference with Moroccans who have Dutch nationality does not stop. “Morocco’s tentacles have found their way deep into Dutch society,” said Christian Democrat spokeswoman Madeleine van Toorenburg.

Dijsselbloem: “The way in which Morocco has decided to go its own way is a continual strain on of the bilateral relationship between the Netherlands and Morocco.”

Hop Aboard the Obama Change Train

Tuesday will go down in American history as record-breaking turnout for both voter registration and One Stop Early Voting. Why are Americans running to the polls to vote when in past years masses didn't even bother to register? Americans rank as the eternal optimists with lots at stake this Election Day and we sense a real possibility for change.

As we wait the final decision, more passion and hope for change expands on the horizon. The Obama train races for the White House with huge numbers of international journalists, editorial writers, and bloggers of all sorts rooting for the Obama Campaign for Change. Why? Everybody worldwide wants change for America--dramatic change and do it now.

While pundits shared comparisons of great past presidents on television, Parade Magazine published a survey (10/2008) of seven traits that two of the greatest presidents embraced. Obama ranked far above McCain in five of the seven, the highest with a 38 percent difference; one trait tied 50-50, and another with a two percentage point margin, Obama in front.

No doubt about it, this election may be close, but the American public has expressed loud and clear their disappointment about the absurd attacks hurled at Barack Obama by John McCain. You'd think a 26-year seasoned senator and former Prisoner of War would think a little closer about what exactly his words imply about our country, our government, our leaders and our citizens.

Additionally, McCain repeatedly tried to create a racial and religious divide in America, along with terror-mongering all attributed to Obama as evidenced at some of the McCain rallies. Need I mention how some berated his racial identity and religion, not to mention incorrectly, over the course of two years?

Sadly, McCain has tried to persuade the American public that Obama maintains ties with terrorists and promotes socialism. He evidently forgot that presidential candidates go through rigorous security clearances at the Top Secret/Special Background Investigation (TS/SBI) level. All members of their family do as well.

In one of the TV ads, McCain says he's been tested. Exactly what test did he receive to reside as our next president? Was he President Pro Tem when we weren't looking? I don't think so. And did running mate Sarah Palin get tested too? Sounds like years of entrenched politics, Bush supporter, maverick and age stand as qualifications. Maverick was never considered a positive quality, unless of course, your job was on Wall Street or in real estate.

Best of all, McCain must see Obama as a formidable opponent who displays all the characteristics of a charismatic leader. If not, then there would be no need for McCain to dream up ludicrous claims about Obama and questionable connections to the underworld. But wait, there's more. Does McCain expect the American public to believe it all?

Think about it, if America wants different results, then we need to get on board the do something really different overhaul train. Let's unload an antiquated infrastructure; try diplomacy and communication with our foes; reinvent health care for the masses; carve new standards for election campaigns; restore ethical values and respect to government; promote racial, religious, cultural and gender equality, and surrender major funds for education renovation, just to name a few.

America needs a president with lots of energy to mobilize an entire nation, and in the words of Colin Powell, a steady hand of leadership. A president must be fit for constant high stress, educated by the best in the world, seasoned in the trenches of America and harbor an acute awareness of world issues. Our president must be a bridge to both youth and maturity, personify cultural astuteness both at home and abroad, and exude a charisma unlike any before to stand up to the long road ahead.

Barack Obama is the only choice for a new America and the restoration of foreign diplomacy and teamwork.
Posted by Bea at 8:09 AM 6 comments:

Paintings from Movies: Girl with a Pearl Earring 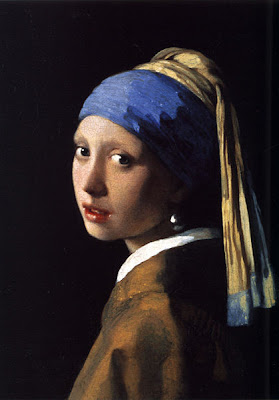 In this movie the story behind this painting is told. The girl on the painting (Griet) is represented by Scarlett Johansson. The movie is based on a fictional book of the same name written by Tracy Chevalier.
Posted by Eva at 1:00 AM 1 comment: