With reports that much of Russia’s military presence in Georgia has been withdrawn, reflection on a serious conflict which threatened to ignite the entire South Caucasus is becoming more and more the order of the day. For whatever reasons, and whoever is to blame, the conflict between Russia and Georgia was the most serious for years. Despite Russian claims of thousands dead, hundreds died in South Ossetia and Georgia proper, and tens of thousands lost their homes in military action reminiscent of the ethnic cleansing which devastated the former Yugoslavia in the 1990s.
Without a doubt, fallout from the confict -- especially as allegations of abusing a truce agreement continue to be levelled at Russia -- will resonate for some time to come. The BBC reports, for example, that while Russian combat troops have pulled out of Georgia proper, other troops under the premise of peacekeeping will remain which potentially allow Moscow to maintain the effective division of the country between East and West thanks to control of parts of the highway around Gori.

Ostensibly a “buffer zone,” questions are now being asked as to what is the real reason for their presence, especially as Russia also intends to remain in the Georgian Black Sea port of Poti.

Some international commentators and many Georgians believe that Russia’s continued presence on Georgian soil is to achieve one main goal other than the control of a former Soviet Republic that dared to turn its back on its former rulers Moscow. The goal, they say, is to seek regime change and the removal of the Georgian president, Mikhail Saakashvili, from office. But, if that is the case, the plan seems to have backfired. For now, at least, Saakashvili is riding high on a wave of anti-Russian and nationalist sentiment in Georgian society.

In a few months time when the smoke clears, however, it’s anybody’s guess. Known as an impulsive hothead, some real and very difficult questions are bound to be asked as to why the Georgian government responded to months of alleged Russian provocation by attacking South Ossetia and shelling what it claims are still Georgian citizens living in the breakway region’s capital of Tskhinvali. Russian forces were known to be stationed on the other side of the Roki tunnel leading into South Ossetia, so what on earth was going through Saakashvili’s mind.

Blogging in Turkey; A Growing black hole in Turkish cyberspace

While the number of blocked web sites reaches reached to 853, including popular Youtube, several web sites and blogs block themselves as an act of protest to draw attention to the increasing censorship over the Internet.

It all started with the blocking of YouTube, for the third time in May, for insulting Mustafa Kemal Atatürk, the founder of the Republic. This was the last straw that sparked a nationwide protest campaign spreading throughout Turkey's cyberworld, where the number of blocked Web sites has now reached 853.
Read the article herreee
Posted by Unknown at 12:49 PM No comments:

The most stupid burglar in the world...

The most stupid burglar in the world, read the story herrreee

Barack Obama confers with Sen. Joe Biden (D-Del.) during a hearing of the Senate Foreign Relations Committee, which Biden chairs.

Barack Obama has chosen Delaware Sen. Joe Biden as his vice presidential running mate, a pick designed to shore up the Illinois senator's foreign policy credentials in advance of the November election against John McCain.

Biden's selection was confirmed by a Democratic source after an evening of speculation that centered on the Delaware senator when it was reported that the other top contenders were no longer under consideration. Biden had been considered the frontrunner for the job in recent weeks -- a position confirmed by a last-minute, unscheduled trip last weekend to meet with the president of Georgia.

News of the pick was reported in advance of the Obama campaign's planned Saturday announcement to supporters via email and text message.
Biden was first elected to the Senate in 1972 at the age of 29. A month after his election, his wife and daughter were killed in a car accident. Biden has not been seriously challenged since that first election -- a reflection of both the Democratic roots of the state and Biden's skillfulness as a politician.

Long rumored as a candidate for national office, Biden launched a presidential bid in 1987 that was gaining traction until a video was leaked to the press that showed striking similarities between a speech by Biden and an address by British Labour Party politician Neil Kinnock. Biden sought to beat back the controversy but subsequent allegations about plagiarism and resume inflation in law school forced him from the contest.
Posted by Unknown at 10:25 AM 3 comments: 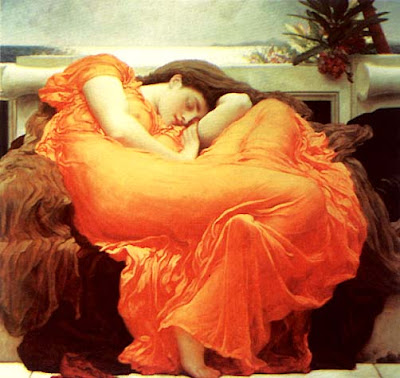 Lord Leighton of Stretton was born the son of a respected Yorkshire physician in 1830.
He was well educated, and received his formal training with an emphasis on the culture of the ancient Greeks and Romans, an influence that later affected the style of his paintings.

His paintings were widely recognized in his time; one famous work of his time was purchased by the Queen of England. Lord Leighton was a meticulous painter, always devoting a great deal of his time to the research and planning of his paintings.
Posted by Sandra Singh at 8:06 AM No comments: