In this sometimes weird baby world there is one thing I like very very very much.
You can see your baby on a 3D ultra-sound scan.

In Holland a prenatal ultra-sound scan is performed standard at 12 and 20 weeks of pregnancy. The first scan is to determine the gestation of your pregnancy.
The second to check the anatomy for abnormalities.

We liked to see our unborn little darling one more time, so we decided to make a “we are so curious and just for fun” scan.
Just to see the baby’s face, fingers and toes. And to hear the little heart beat again.

This is the first time that I can’t describe my feelings in words. Only that it was a wonderful and a beautiful experience.
When I saw my little darling my first reaction was: “I know you” and straightaway a wave of love came over me. 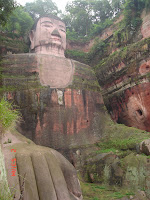 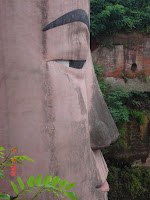 The Leshan Giant Budddha is an enormous statue carved into the cliff side of Lingyun Mountain.

The buddha is over 71 meters tall with 28 meter wide shoulders and a 15 meter high head. More than 100 people can sit between the Buddha feet.
A local saying explains; "The mountain is a buddha, the buddha is a mountain".
Posted by Sandra Singh at 2:18 PM 1 comment:

Women heard 'round the world

Saturday, August 16, 2008
People say women are dangerous. Do they mean clever? Or sexy and charming? Throughout history some women have attained power with intelligence, others with sexuality or cruelty. Indeed there are women who wield a vast array of characteristics and devices to get what they want – or what’s theirs to take. Turkish author Ali Çimen wrote about 30 such women who have shaped world history.

Some women are remembered with respect and love and others with fear… There is a story behind each of the women who have caused the world to stir at the mention of their names: Cleopatra, Mata Hari, Hürrem Sultan, Eva Peron, Benazir Bhutto, Simone de Beauvoir, Jeanne d'Arc, Ilse Koch, Helena Rubinstein, Oprah Winfrey and others. “History has shown us how dangerous women can be if their hearts are broken or if they are obsessed with power and ready to use their charm like an assassin uses his silenced gun to achieve it” says Ali Çimen, journalist and author of the book ‘Women who changed history'. At the beginning of the book the author says, “When you look back you see a male-dominated world. Those who conquered with their swords, who opened and closed eras, are mostly men. Does this mean that men always had the leading role in history? There are such women who stood out in history who, let it not be misunderstood, those ‘famous' men could not help but sweat in the shadow of the greatness of these women.”
Read the full article herreeee
Note: met with Ali a couple of times when he was correspondent for Zaman in the Netherlands.Last time he inteviewed me. Very clever and open person.
Posted by Unknown at 9:35 AM No comments:

Mykonos - Greece
Posted by Unknown at 9:09 AM No comments: