Some of you may find it strange that Erkan didn't updated his blog the last couple of days but the reason behind this is that he don't have access to his blog anymore and the hosting company is not responding to his emails. Erkan is therefore highly frustrated at the moment, in the terrible heat of Istanbul: 34 degrees!
Posted by Unknown at 2:48 PM 1 comment:

What are your kids doing this summer?

Hamas, the terrorist organization that rules Hamastan, is running camps for as many as 150,000 children. And don't think that these camps are for sport, study the nature or only for fun and time to socialize, no the children receive 'healthy doses of religious and political indoctrination', they’ll be learning how to handle weapons and navigate assault courses.
In a video report about the camps at Haaretz.com, children are shown going through martial arts routines, learning how to take a prisoner, and performing the high-stepping speed march that for some reason is standard practice for the militias of dictatorships. And while the children jump through plastic hoops on the parade ground (another sure-fire sign of fascistic inclinations), their minders jump through semantic ones, insisting that the camps preach a message of peace before rattling off the usual lists of grievances and demands.
But mostly the young campers shout. They shout a lot. They shout “Kill!” “Slaughter!” “Blow up!” and “Charge!”
He, we're talking about children in the age of 6 until 12 years! What a nobel organization Hamas is...
More herreee
Posted by Unknown at 1:41 PM 20 comments: 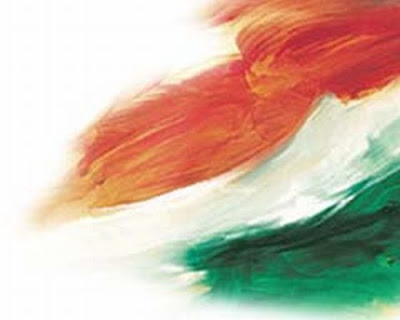 On 15 August 1947, India attained freedom from the British Rule. Every year, August 15 is celebrated as the Independence Day in India. This national festival is celebrated with great enthusiasm all over the country.

"Long years ago we made a tryst with destiny, and now the time comes when we will redeem our pledge, not wholly or in full measure, but very substantially. At the stroke of the midnight hour, when the world sleeps, India will awake to life and freedom. A moment comes, which comes but rarely in history, when we step out from the old to the new, when an age ends and when the soul of a nation, long suppressed, finds utterance.... We end today a period of ill fortune, and India discovers herself again."
Posted by Sandra Singh at 10:16 AM 3 comments: