The trial of Hrant Dink his perpetrators

Armenian-Turkish journalist Hrant Dink was assassinated before his office a year and a half ago. The ostensible reason was that Dink had “insulted Turkish blood”. The gunman was arrested and put on trial, along with his associates. Since then, it has emerged in the investigation and trial that security officials had been warned several times about the plot to murder Dink, but did nothing and instead told the concerned citizen to tell no one. Since the trial began, evidence and files have mysteriously disappeared. Also disturbing has been the lightheartedness of the perpetrators and the seeming collusion of police. On the day of his arrest, grinning police officers took photos of themselves with the happy murderer in front of a Turkish flag. In yesterday’s trial session, that mockery again was apparent.
People I know who have attended the trial in the past have told me that Dink’s wife, lawyer and supporters have been pushed, insulted and threatened by nationalist spectators, with no move by the court to protect them.
More hereeeeee

Children of parents from Muslim countries perform worse in Western education than immigrant children of Christian or oriental-religious background.
Children of immigrant from countries without a dominant religion, such as China, perform the best.

These are the conclusions of the Dutch researchers Jaap Dronkers and Manon de Heus of the European University Institute in Florence. They studied 9,414 immigrant children aged 15 with parents from 46 countries in 16 West-European countries, New Zealand and Australia.
The results are presented last week in Berlin.
The study shows that children of parents who are lowly educated and come from a country where Islam is the dominant religion, score on average 30 point lower in the natural sciences than children of lowly-educated parent from non-Muslim countries.

The researchers used the international Pisa study. The average score in this test was 500 points, with a standard deviation of 100. Kids from a Muslim background systematically scored by one third of the deviation less. "That is very considerable," says education sociologist Dronkers. Muslim immigrant students with highly-educated parents scored just as well as other immigrant children of highly-schooled parents, according to NRC.nl

The negative 'Islam effect' can't be completely explained by the fact that Muslim immigrants often come from the socially-economically weakest areas of Turkey, Morocco and Algeria, according to Dronkers.
A possible explanation is that Muslims feel discriminated more quickly. And their idea about the male-female relationship and about honor possibly impede individual development. A UN study has already shown that the inequality between men and women in Arab countries prevents the economic and cultural development there. 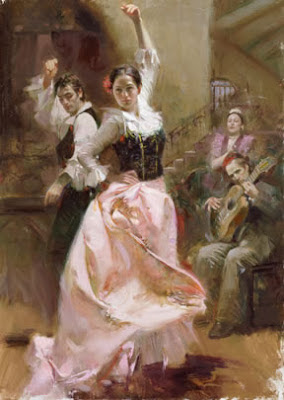 "Dancing in Barcelona" by Pino Dangelico.
Posted by Sandra Singh at 12:01 AM 2 comments: