Germany won today's match against Turkey in the last minute. Exactly how Turkey won its games against Czech Republic and Croatia. In my opinion this was Turkey's best match, but they lost.
But who are the real winners? Undoubtedly the German and Turkish players. And the common men on the streets in Germany and Turkey. Why? Some Turkish outlets already started talking about 'We finally will take Vienna' and German outlets started to write about that 'we will fight against the Turkish invasion'. 'It will be war' and more of these nonsense.
It was a sportive match. And just only a game. Only two yellow cards.

And for some Turks in Kreutzberg, Berlin, it has been a day of doubly festive.

Come and go when you please 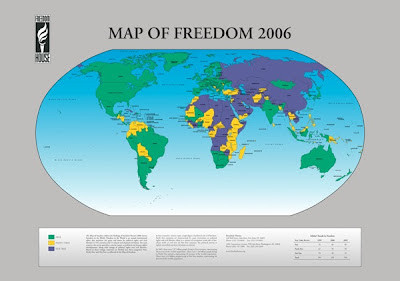 I've been away since the football match Holland - Romania. Not far away, I think I've been closest to home for a long time. Locked up in my room or in the University Library to study my ass off. But about very interesting things.

The freedom of speech and press were important themes in these tests. Lots of things are involved with these universal human rights. It's a real privilege to live in a country where these rights are of great importance in politics. To know that only 17 percent of the total world population lives in real freedom is unbelievable. The majority of the world still lives in circumstances where they are not free to express themselves and live a free life as I'm accustomed to.

To read again about these important values, remind me of the importance of freedom. I'm not suppressed by anyone. I can go wherever I want to and there is nobody except time and money limitations that stops me from doing all the things. There are rules to follow and sometimes others prevent you from going somewhere. The whole reason why I wanted to go to Nepal for example, was to visit Tibet. Next Wednesday (I'm already in Nepal by then) the borders will be opened again for foreign tourists. It's not sure yet if I can enter, especially money might be a problem. I've no idea with what kind of demands the Chinese come up with but the fact that the possibility is there again is already great.

A small detail: Tibet is considered partly free by the Freedomhouse while China is not free.

Click here for an interactive version of the map on Freedomhouse.org.
Posted by Eva at 2:30 PM 4 comments:

Germany - Turkey: I did it!

Tonight, again?!!
Yes, for the very first time I bought a t-shirt of the Turkish national team. Never did that in my life, not even when the Dutch were playing Euro 1988 and won the finals...
My prediction? 3-2 for Turkey. And a lot of yellow cards...but as long as the Germans football players are acting so arrogant, everything is allowed to beat them!..))
Posted by Unknown at 1:58 PM 2 comments:

Engaging with people in meaningful ways has been proven to help overcome our fear and prejudices and learn about the sources of agitation, misunderstandings, and misinformation.

Read more about this aspect of Who Speaks for Islam, part 3 and give us your comments.
Posted by Bea at 5:51 AM No comments:

Lotus.
Posted by Unknown at 1:10 AM No comments: