"Muslims, show some respect": Open letter in Dutch newspaper by a Dutch Muslima

"Why do we behave without respect in the Netherlands while we expect others to take account of us?"

Samira al-Onal is the pseudonym name of a highly-educated Dutch Muslim woman.

As exceptions to normal policy our editorial staff sometimes decides to publish pseudonym articles e.g. when the author is afraid for repercussions.
source: http://www.devolkskrant.nl/ of June 10, 2006

"It is time that we Muslims let go of our feeling of superiority, hypocrisy and ignorance" says Samira al-Onal.

I urge the Volkskrant to publish this article with which I pursue two goals: the first is to expose the centuries-old egoism of Muslims concerning non-Muslims. The second to show that not non-Muslims but Muslims themselves are to blame that they stand in bad light."

We demand from non-Muslims that they respect our religion, that they accept our cultural demands and that they support us financially. But what do we give in return which they demand from us?

Before Islam the Middle East was inhabited by people who adhered to an in origin Indian ideology wherein statues were venerated. Islam then proclaimed that no images of God are allowed. What happened next? Wherever statues were found these were destroyed by Muslims who then converted these people to Islam, if needed using violence and murder.
Muslim history writers wrote with pride about what they saw as successful heroic deeds. And we still live under the delusion that the quality of the lives of indigenous people is improved by replacing their temples and churches by mosques, and that we conquer their hearts by doing so. But nothing is further from the truth and why the Dutch say 'our culture is disappearing as we do see mosques everywhere' when yet another church is transformed into a mosque.

We call our sons Muhammad, Hassan and Ali, but allow these names to be used for murders, for hitting women, for theft, and for showing no respect for other cultures. If we believe that Islam stands for peace -our excuse is that these Muslims give us a bad name. But are these names indeed holy?
The prophet and his followers waged wars and Mohammed murdered people himself. Are mosques indeed superior to the temples and churches upon which they were built? We are in fact saying that Islam is inferior to already existing religions or else our ancestors would have had no use for their 'stupid', non-holy materials.
We consider it marvellous that Islam is growing but which can only be considered the growth of blind faith. You can believe whatever you want, but believing without any proof is witnes to stupidity.With the support of my parents I plucked-up the courage to examine Islam in the past and present, and found much that makes me sad.

The present time: consider the decapitation of non-Muslims in Iraq and Pakistan. Those so-called heroic deeds are perpetrated in name of Allah. What is our response to this? Do we condemn this? No, we look on silently, but do demonstrate on streets when an insulting cartoon is published in a newspaper and we threaten politicians with their murder. Embassies of non-Muslim countries are attacked, and numbers of murders are committed out of our passion for heroic martyrdom.

Simultaneously, and already for centuries on end, we find it normal to ridicule holy elements in non-Islamic cultures. Why do we behave disrespectfully of Dutch culture and that while we consider that everyone must show respect for us? That people in other cultures do not protest against us shows that they are wiser then we are.
We find existing politics guilty or the media, but Geert Wilders didn't just fall out of the blue sky and if we had shown more respect, Wilders' political platform wouldn't exist. Do we ever ask ourselves why there isn't an anti-Chinese political party?

Back to violence: When people are decapitated or shot in name of Allah that doesn't mean that He condones this. And where is written that suicide-bombers will arrive by Allah as martyrs? Also non-Muslims are Allah's children. Why therefore does Allah allow that one group of 'children' humiliates, persecutes and murders the other group?
In India, and each year, and much more than in the West, trains, busses, temples and other buildings are blown-up by Muslims in name of Allah. We don't even respect Hindu religious celebrations because our ancestors did not in previous centuries. Islam attacked India around AD 700 and occupied India well into the 18th century. In those centuries Muslims occupied India using much violence and plunder. Religious men and scientists were murdered; others converted or made into second-class citizens. Christians, Jews and Hindus were not allowed to hold good jobs, had to pay religious taxes and tax and put on food-rations. This while we, and European culture, owe much to the old India, especially concerning science.

Why don't we demonstrate against these and other actions of our fellow-believers? Why don't we show respect in the Netherlands where we adhere to few rules and civic norms, and where we perpetrate senseless violence - while we make use of their medical facilities, ask for special attention of teachers and community-workers, complain a lot while expecting non-Muslims to take account of us?

We should get rid of our egoism, our short-sightedness and sense of superiority, and stop feigning holiness, or else it is better for us to return to our Muslim lands so that non-Muslims can live in peace and we get rid of the hatred for Muslims but which we generate ourselves.

Update: the article is authentic. Got the proof of it.
Posted by Unknown at 1:07 PM 22 comments:

I read the post "Women in Iran" on Plateau of Iran blog.
You will find part of it here below. Its quite interesting, and never imagined that you can see it through this angle.

Generally, religions have a patriarchal view of the relationship between the genders.
But some scholars point out that, in comparison with other religions, the idea of patriarchy is even greater in Islam. They mean that there are in the Koran (Quran) many verses, especially Surah 4 which clearly legitimizes gender inequality. Even hadith (stories from the Prophet’s life) and Shariah (Islamic law) have the same tendency.

Since Islam regards women as an active sexual power, it is important to restrict women’s sexual power over men. The result is isolating women and men in different worlds. A woman’s sexuality has to be concealed. Her looks and behavior must not reveal her sexual force since it will remind the man of his weakness.

Fatima Mernessi, a famous Arab feminist, explained a long time ago that the Christian portrayal of the individual as tragically torn between two poles (good and evil, flesh and spirit, instinct and reason) is very different from that of Islam, which has a more sophisticated theory of the instincts, more akin to the Freudian concept of the libido. She writes:
"In western culture, sexual inequality is based on the belief in the biological inferiority of woman. In Islam, it is the contrary: the whole system is based on the assumption that woman is a powerful and dangerous being. All sexual institutions (polygamy, repudiation, sexual segregation, etc.) can be perceived as a strategy for constraining her power (Beyond the Veil, Mernissi 1975, P 16)."

This explains why the Koran (Quran) maintains man’s superiority and domination over woman. It is men’s responsibility and duty to keep women under their control.
Posted by Unknown at 8:58 AM 5 comments: 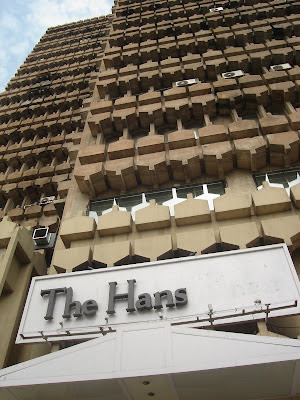 Last summer I took this picture special for Hans from Hans, during my visit to Delhi.
It was stuck for almost 1 year in my "broken" desktop untill I found it one hour ago.
Posted by Sandra Singh at 12:01 AM 3 comments: