You must have heard it. Holland won the football match again yesterday with 2-0 against Romania.

My friends were already in front of the telly when I arrived, but immediately I noticed a difference in the atmosphere. Not because I walked in, but because there was a feeling that it didn't matter. National coach Van Basten already gave this impression because the B-team was playing, so we definitely missed our A-team goalie Van der Sar. Stubbornly we raised the Van-der-Sar-song when Stekelenburg prevented the Romanians from scoring goals and still the spirits didn’t raise. Nor the 2 - 0 felt as a victory. Maybe the atmosphere wasn't that energetic because we already knew we were in the quarterfinals. It might be because it was Tuesday. Who knows...

But this Saturday I do expect everybody to wear their huge orange wigs again. That they have the tooters to cheer the team again. That my friends are wearing their orange overalls or t-shirts with 'better 1-0 ahead than 0-1 behind' and that we'll have a huge party at the end. Because I don't watch football because I like it so much. I watch football because I like my friends so much!
Posted by Eva at 3:20 PM 4 comments:

Prison for Turkey book 'insult' : Turkey on its way to the EU

A Turkish publisher has been sentenced to five months in prison for publishing a book by a British author about the mass killing of Armenians in 1915.
Ragip Zarakolu was found guilty of "insulting the institutions of the Turkish republic" under Article 301 of Turkey's penal code.
The controversial law was recently reformed under pressure from the EU to ensure freedom of speech in Turkey.
This is the first high-profile verdict to be handed down since then.
Mr Zarakolu's sentence seems to confirm campaigners' fears that changes to the law were merely cosmetic, says the BBC's Sarah Rainsford in Istanbul.
In April it became a crime to insult the Turkish nation, rather than Turkishness. But insulting the Turkish nation can still be punished by up to two years in jail.
Continue reading here.
Note: In 1971, Ragip then 23 years old, was imprisoned for having 'secret relations with Amnesty International, and the list of bizarre indictments goes on until the day of today!
Anno 2008 you can be imprisoned for having a different opinion than the official Turkish doctrine, and even for criticize it!
Update: Members of a Kurdish children's choir face up to five years in prison as they go on trial in south eastern Turkey. The choir - whose members are aged from 12 to 17 - is accused of spreading propaganda for the outlawed Kurdish separatist rebel group, the PKK.
The charges were brought after the group took part in a world music festival in San Francisco, and sang a march in Kurdish. The prosecutor's indictment claims the song is the anthem of the PKK. Here more!
Update: One of Turkey's best known singers, Bulent Ersoy, has gone on trial charged with attempting to turn the public against military service. Continue laughing hereeeeeeee
Posted by Unknown at 10:19 AM 5 comments: 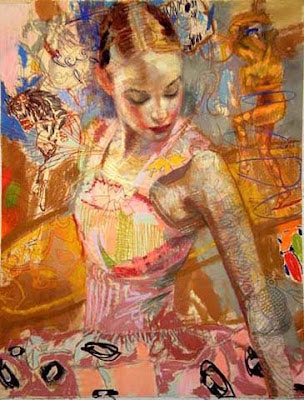 "Cirque" by Charles Dwyer.
Posted by Sandra Singh at 7:49 AM 1 comment: