The following article by Ilter Turkmen is refreshing.
Its simple explains why the Turkish Constitutional Court decision to halt the execution of constitutional changes, proposed by the party that would have allowed the wearing of the Islamic headscarf in universities, has no legal basis.

Two sentences are really interesting in this article:

'Chief Justice of the Constitutional Court Haşim Kılıç, in an anniversary address in April, emphasized that the rule of law does not mean the supremacy of the judge. I think he is all alone in this viewpoint.'

'Criticisms over the bill's annulment cannot veil the fact that the AKP made a crucial political mistake by introducing changes to lift the headscarf ban. The issue from now on is to find a way out to prevent instability in the country. The top reasoning in the closure case against the AKP was the headscarf issue. Since this is resolved through the annulment by the top court, it may be possible for the court to remain satisfied by ruling in favor of the AKP in the closure case and for depriving the party from treasury subsidy.'

Lets see what will happen the coming weeks. The lame argument that Turkey went through rough waters for the last 85 years and that another crisis will handle accordingly sounds defaitistic and fatalistic to me.

Enjoy the article by clicking here.
Posted by Unknown at 4:40 PM No comments:

The Dutch on its secret mission in Austria and Swisse 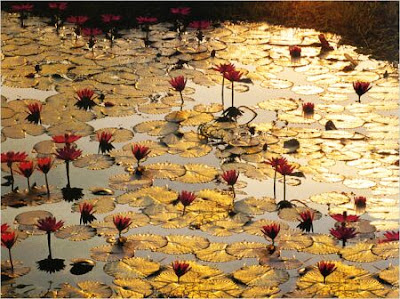 "Lotus Pond" by Bruno Baumann.
Posted by Sandra Singh at 12:06 AM No comments: