Just click here, and watch this disturbing clip and read BBC their story.
Posted by Unknown at 10:34 PM 2 comments:

Some disturbing facts about Turkey's youth

I came across this column in Today's Zaman.
Is Turkey's youth an asset or a burden? I don't have the answer.
Yesterday I gave a lift to two Turkish youngsters. They were university students and could barely speak English. And I am still surprised by that. That 'army and religion' are the dominant factors in Turkey became understandable when you read the following column.


A bleak picture of Turkish youth
By Ibrahm Kalin

Turkey has one of the youngest populations in the world, with about 20 million people between the ages 15 and 30. According to the 2007 census, about 60 percent of the total population of Turkey is under the age of 30. So just what is this young and extremely dynamic population doing?

Three major reports released recently present a rather bleak picture. According to the United Nations Development Programme (UNDP) report titled "Youth in Turkey: National Human Development Report 2008," Turkish youth are faced with a series of economic, educational, health and social problems. The unemployment rate is about 20 percent among the youth. This is twice the national average. About 40 percent of Turkey's youth (i.e., approximately 5 million young people) seems to be doing "nothing;" they don't work, they don't go to school and they don't participate in any political or civil society organizations. They seem to have given up on their future.

Another report, prepared by the Ankara-based Association of Young Businessmen (ANGIAD), reveals even more disturbing facts. According to the report, the vast majority of Turkish youth are neither reading nor doing sports. They are not interested in any serious cultural, social or cultural issues. They follow political events but do not see politics as a safe venue for their civic participation in Turkish affairs.

The story of stuff with Annie Leonard

I have just received the link bellow, through the swy-net of SWYAA (of which I am member) and I think you will find it very impressive.
Think of it as an investment towards your awareness...
http://storyofstuff.com/
Posted by Christos Moissidis at 3:12 PM 3 comments:

Cell phone workshops conducted by teens for adults is a brilliant business idea, offering youth the opportunity to teach their tech-savvy to unskilled older users.

Bellendoejezo, a Dutch company, came up with the idea to hire teenage “phone coaches” to help new adapters or those struggling to understand more high tech functionality. These teachers are between 12 and 16 years old, offering them a very unique opportunity to share expertise with older generations.

Younger generations often take for granted the ease at which they are able to use all the functions of modern cell phones, from ring tones and cameras to downloads and text messaging.
“The program’s goal is to improve their social skills and self-esteem, and give them access to corporate environments they might otherwise not be exposed to,” SpringWise explains. “Bellendoejezo is aimed at the corporate market, and charges up to EUR 50 per person for 60-minute workshops. Clients so far have included law firms, banks and an energy company.”
It’s a great business idea provided the youth are patient enough!
Posted by Unknown at 9:18 AM No comments: 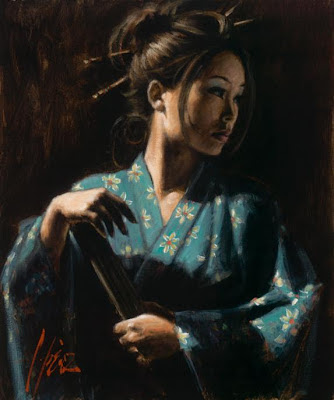 "Geisha en Turqueasa" by Fabian Perez.
Posted by Sandra Singh at 12:02 AM 1 comment: