In 1977 I travelled for the first time to Greece, and from there to Egypt. Egypt by then was at war with both Libya and Israel as well. Not that many tourist in Egypt - some lost Saudis and people from Yemen I remember. A couple of months later President Sadat of Egypt went on a historical visit to Israel.

Back home, in the Netherlands I organized in 1978 a forum with delegates from Israel Committee the Netherlands and the Palestinian Committee which had direct links with the PLO. It became an unforgettable evening.

Today, Israel celebrates their 60 years of existence. The voices of then, that Israel once will be destroyed, are still out there. The religious bigots of Hamas, who execute their power by force, is still insisting that they only can reach their political objectives by force.

Israel is the only country in the Middle East which has a democracy and a modern economy.

They are attacked 7 times by 'united Arab forces' but still their democracy and economy is alive, in contrary with these so called modern Arab nations.

An update about the 'intellect' of Hamas watch this.
Posted by Unknown at 8:13 PM 18 comments: 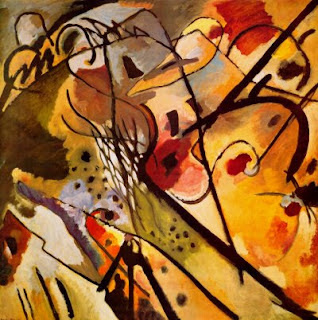 "Improvisation No. 23" by Wassily Kandinsky.
Posted by Sandra Singh at 9:58 AM No comments: