Beer and the Death

The Beer Can Coffin is the ultimate way to honor a thorough-bred red neck. If if you know someone proud of their hickish ways, you know they wouldn’t get fulfillment from a traditional burial in the afterlife anyway.

This coffin was designed for Bill Bramanti of Illinois who happens to be a major Pabst Blue Ribbon connoisseur. He loves the beer brand so much, he had this coffin created to resemble a can of it.
“At 5-feet-9 inches tall, this beer can coffin weighs a cool 280 pounds,” BornRich says. “The silver coffin is designed with red, white and blue, just like a Pabst can. The beer lover might have his own plans to depart in this coffin, but for now, he is using this giant beer can coffin a s a cooler and he has already thrown a party for his friends, featuring his coffin filled with ice and yes, the Pabst Blue Ribbon.”

Any real red neck would die for one of these…
Posted by Unknown at 8:15 PM 3 comments: 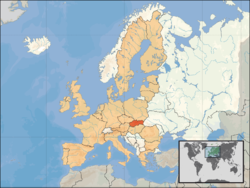 The European Commission has given Slovakia a go to introduce the Euro. If the EU-ministers of Finance will reach an agreement on their next assembly, the Euro will be introduced on the 1st of January 2009.

Slovakia, if introduced, will be the sixteenth country that acknowledges the Euro.
Posted by Sandra Singh at 5:25 PM 1 comment:

The South Island's Milford Sound is the eighth wonder of the world. The sound owes some of its allure to the 23 feet (7 meters) of rain that falls here each year, nourishing lush grasses and forests.
Posted by Unknown at 10:00 AM No comments: