Amsterdam is for some well known for its red light entertainment industry as well as liberal life scene, its art, and as business hub. But what most people have overlooked is its rising status in the world of fashion and even haute couture.
The city of Amsterdam is trying to transform its image to be regarded instead as a hub for creative talent and design. A lot of old bordellos have been converted to fashion showrooms, displaying collections from well known designers as well as budding, yet-to-be-discovered talent.
Fashion boutiques are opening in “de Wallen” or “Walletjes” as locals call it, one of the world’s most famous red light districts.
The project, called “Red Light Fashion”, is the investment the city hopes will bring its wildest neighbourhood a classier charm, targeting young fashion in particular. 16 formerly erotic establishments have been been changed to fashion show rooms where 14 Holland-based designers display their wares.
Participating labels include Bas Kosters, ...and beyond , Daryl van Wouw, Mada van Gaans, Roswitha van Rijn, Sebastic, Sjaak Hullekes, Ignoor, Jan Taminiau, Jeroen van Tuyl, G+N, Edwin Oudshoorn, Corné Gabriëls and Conny Groenewegen.

While it’s slowly gaining recognition for its new sartorial elements, prostitution is still high. At all hours of the day, red lights glow in the windows of the picturesque old European architecture.
Inside these windows of the love show rooms are where prostitutes are typically seen flaunting their wares. Directly behind these window displays are their ‘offices,’ or their beds. Prostituion was legalized in the Netherlands in 2000, and remains legal today, bringing in booming business from around the world.
This influx of visitors has lead to a very lively urban atmosphere, and it’s not all about the sex. The flocking of countless tourists has lead to the opening of coffee shops, restaurants and now these cutting edge fashion boutiques, which find cozy homes amont the stunning architecture.

Note: just added the sites of these young designers here above. None of them belongs to the Dutch fashion 'establishment'.
Posted by Unknown at 11:16 AM 6 comments: 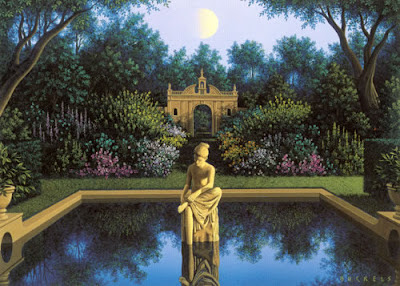 "The Vale of Enna" by Jim Buckels.
Posted by Sandra Singh at 10:45 AM No comments: