This article from the BBC gives a good review of the Youtube and Google ban in Turkey. How long does it take to put blogspot (which is Google related) to the blacklist??? When will the allies resurrect against the pencil-licking censocrats and have another D-Day, where D stands for (Re)digitalization...
___________

Last month Turks found they could not access many Google services. YouTube is already banned. The BBC's Jonathan Head looks at this brewing battle between Turkey and one of the giants of the internet.

Sitting in an Istanbul cafe Ozan Tuzun taps away furiously on the keyboard of his laptop, trying to break the invisible walls that surround him.

"I'm going to DNS.com now to take one of their numbers… I enter it… no that didn't work. Right let's try to get a DNS from Google… no… ok we'll try Ktunnel…"

What Ozan is doing - and it takes him about 10 minutes - is something most of us can do in just seconds.

He wants to watch YouTube. And he's an expert, a technology buff; most people trying the same thing from Turkey would give up.

"It's very frustrating, it makes me feel like I'm living in a third world country," he says.

The ban on YouTube was imposed by a court in Ankara on 5 May 2008, after a series of 17 temporary bans the preceding year.

The grounds by the courts given each time varied, but they followed a number of complaints from Turkish citizens about videos on YouTube deemed insulting to Kemal Ataturk, the country's revered first president.

In 2007 the government passed a sweeping law regulating the internet, known as Law No 5651.

It allows a court to block any website where there is "sufficient suspicion" that a crime has occurred.

The eight crimes listed include child pornography, gambling, prostitution, and "crimes against Ataturk". Insulting or denigrating Ataturk was already a crime.

The Turkish government refuses to publish statistics, but campaigners for internet freedom estimate that more than 4,000 websites are currently blocked, making internet censorship in Turkey amongst the heaviest in the world.

"For years I wrote about China and Middle Eastern countries that tried to censor the internet," says Serdar Kuzuoglu, the technology editor for Radikal newspaper, "but I could never imagine that one day I would be writing the same things about my own country."

"The blocking process is very unclear. There are eight categories of crimes which allow the courts to block a site, but it can also come from an individual complaint.

"It's very difficult to find the responsible person." 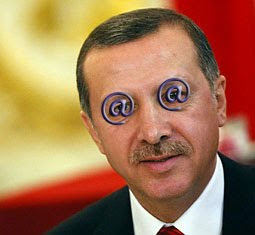 Happy Birthday Canada (1 July)
Posted by Unknown at 8:00 AM 3 comments:

Arash's World: So many Books, So little Time#links
Posted by Unknown at 7:22 AM No comments: