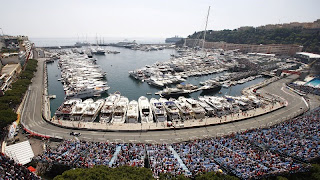 Every year in May the most famous races of the Formula One calendar is held in the streets of Monte Carlo, Monaco. Lots of glamour, money, prestige and jetset. For most of the race drivers it's their home Grand Prix, racing through their front yard.
Being passionate of cars and car racing, especially F1, it's my least favorite race. Why? Because the infrastructure is absolutely not fit for racing at this level. But, from an objective point of view, it's a very interesting event, watching fast cars challenging narrow streets and corners going round the track at speeds that reach almost 300 kph (through the Tunnel to La Piscine). Where in the world do F1 pass apartment blocks, a swimming pool, a casino and mega yachts?
8 years ago I had the honour to imagine being an F1 pilot, driving at 80 kph through the Tunnel (windows opened of course, just to hear the blasting sound of my Peugeot 206 GTI reflecting on the walls...) I admit, there is some magic in it, being able to enter the holiest of the holy asphalt, at least in Europe. Being about 25 years too late for becoming potential F1 driver, this is the closest to getting the feeling.

On Sunday I'll be watching the 'Grand Prix de Monaco' on TV. Two weeks later the Circus Maximus (of top speed) will set camp in Istanbul. I'm still hoping to visit the race there (5 years ago I was close!).

My next project will be saving for a mega yacht to watch (or to be watched at) the Monaco race in May of some year in the future...
Posted by Osman Gürbüz at 2:09 PM 2 comments:

Wow, it's hot in Istanbul! And humid. I know that some readers of this blog would love to be here right now, so be here, nobody put restrictions on travelling to Turkey. Am I right Osman?.)
Snurk, snurk, what's going on in Turkey besides the sex scandal where the husband even didn't apologized to his wife for a 10 year long affaire?
At least in the Netherlands, the guy who had a affaire said: 'stop'. After he was throwed out of his house by his wife.
What in Turkey? They still try to explain that it is some kind of 'conspirary'. Probably done by foreigners. Yep, the country of Denial never can face the truth, always putting  foreigners on the block, ready to beheaded.  How racistisc!
Good night! More later.
Posted by Unknown at 1:45 AM 4 comments: