The narrowly avoided row over the appointment of a new Nato secretary general touched on a larger subject: the difficult relationship between the West and the Muslim world.

Turkey considered the Danish prime minister Anders Fogh Rasmussen unfit to lead the alliance because of his role in the 2006 crisis over the cartoons of the prophet Mohammed. Fogh Rasmussen had refused to apologise for the publication of the cartoons in the Danish newspaper Jyllands-Posten in 2005, which caused widespread and sometimes violent protests in the Muslim world.
It was nothing personal, said Turkish prime minister Recep Tayyip Erdogan, but how could a man like that represent Nato in the Muslim world - especially at a time when Afghanistan, Pakistan and Iran are at the top of Nato's agenda? Erdogan said several Arabic countries had voiced their concern to him.

In the current climate it didn't take long before this reaction led to a counter-reaction. Since when can anyone dictate who the North Atlantic Treaty Organisation does or does not appoint as its leader? some people said. Have we become so afraid of the Muslim world that we are ready to give in to any perceived sensitivities of undemocratic regimes in the Middle East? Now more than ever it is time for Nato to stand up for a man who defended the freedom of expression in the face of Muslim protest, Fogh Rasmussen's defenders argued.
And thus what started as a human resources issue - albeit on a very high level - risked growing into a major new chapter in the so-called 'clash of civilisations': the succession of emotional, political and religious skirmishes since the attacks of September 11, 2001.

During Friday night's working dinner in Strasbourg, the succession issue took up far more time than was expected or intended. The alliance was at an impasse: against the consensus among 27 of the 28 member states stood the lonesome opposition of Turkey. "The question is what it will cost for Turkey to give in," said one cynical diplomat who was unimpressed by Turkey's supposedly principled stand on behalf of the Muslim world.
After much negotiating, it became clear on Saturday what Turkey's price was. After talks between US president Barack Obama and Turkish president Abdullah Gül, Erdogan announced that Ankara had been given guarantees that Fogh Rasmussen would appoint a Turk as one of his deputy secretary generals and that more Turks would be given top jobs at Nato's military headquarters. Some Turkish diplomats even claimed that France and Germany were made to promise to be more lenient in ongoing talks about Turkey's accession to the European Union.

It was with considerable relief that De Hoop Scheffer and Fogh Rasmussen appeared before the media on Saturday with the announcement that a unanimous decision had been reached about the succession. A crisis was averted. Fogh Rasmussen said he understood Turkey's concerns. "I made clear I will reach out to the Muslim world and I will make sure [Nato] will co-operate closely with Turkey," he said.

A friend of Bush

It remains to be seen whether this is enough to make Fogh Rasmussen an effective Nato leader, and to overcome possible opposition from the Muslim world.
Anders Fogh Rasmussen (56) is known as "a friend of Bush". He supported the invasion of Iraq in 2003, signing a letter together with seven other European leaders in which they backed the removal of Saddam Hussein and called for solidarity with Washington. It earned him an invitation to president Bush' Texas ranch where they went mountainbiking together - just like the outgoing secretary general De Hoop Scheffer before him.
In Denmark, Fogh Rasmussen's appointment was met with a mix of pride and relief. Uncertainty about Fogh Rasmussen's appointment had all but paralysed Danish national politics. Rasmussen will be succeeded as prime minister by the current finance minister Lars Lokke Rasmussen.

On Monday, there were indications that the cartoons row might not be quite over yet. The Turkish media widely reported that Fogh Rasmussen would issue an apology during a speech in Istanbul, and that the apology was one concession offered in order to get Turkey to withdraw its opposition.
But the Danish news agency Ritzau quoted Fogh Rasmussen as saying there would be no apology. "Listen. In Denmark we do not apologise for having freedom of speech," Fogh Rasmussen said. "You all know that a Danish prime minister cannot apologise on behalf of a newspaper."
Fogh Rasmussen was in Turkey on Monday to speak at a United Nations conference on intercultural dialogue and understanding. As secretary-general of Nato he may have to continue the intercultural dialogue, in one form or another, for some years to come. But he didn't apologize!

Barack Obama is following who?.) 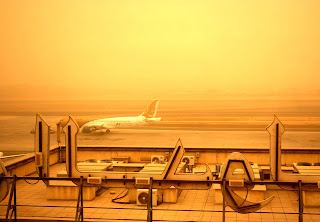