Few days ago, I had a very good not long... rather short conversation with Hans on phone and as usual, we manage to express and share our opinions about the most topics we are both interested! It is so amazing how two people of different age, different countries, or social background (probably) can have a common ground to build their social relationship, especially when they never had the chance to physically meet, like in this case! I believe that is the one of the main advantages of internet, but in this case, I do not wish to write about internet, social networking etc.

Hans wants me - for example - to write about daily life in Greece. It is not an easy task. From my point of view, such request means much more than a brief description of customs, political or social events or whatsoever and I admit that I find it very challenging but also very difficult to sit down and write... in English. Of course there is always the "easy way" of copying and paste what others write, but that is a way how not to present your ideas or perception and further more, this presentation you want to make, loses its original "strength" therefore it loses its value... if there is any.

A very common question or questions that you make to yourself at this point is: "From where should I begin? What should I write? Will I be objective and well understood?"... Thinking about all that, sets the whole procedure of writing as a labyrinth with no easy way to find exit.

Well, I know that my country, its people, its heritage, its history, my language are topics of great interest... and I am also aware that in such a blog with quality as "internation musing" is a right place to motivate discussions, to exchange ideas and to reinforce the wish, the common wish to learn "a little bit more".

As for language, only recently I found an excellent website (www.akwn.net) from Spain; its owner and administrator is a Spaniard Professor (Catalonia), that presents world news in ancient Greek (attic dialect) which that is its main objective! As he also notes: 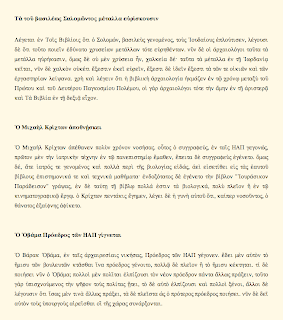 "It is possible that a lot of people who at the beginning feel the desire of studying the language of Pericles give up because of the fear that an original Greek text from an original author inspires, maybe too sudden a collision, and because of the sensation that, out from these texts, it is not going to be useful for anything else. If we remember that for several centuries Greek was the “lingua franca” around all of the eastern Mediterranean (and in the western Mediterranean it was the “lingua docta”), maybe the claim that it be used, within its possibilities, as a present cultivated way of communication, as Latin is, is not too far. If the great figures of Latin literature themselves used to consider Greek as a language worthy of being learned and used, why not do it?"

Further more, I believe some of you have had Classic or Byzantine courses at the university or high school (I still remember a Swedish friend of mine that we first met in Tokyo and when she found out I am Greek, she started talking ancient Greek to communicate with me) and maybe it is a very good idea to refresh your knowledge in ancient Greek... or to use the language as a way of conversation with other people who share the same appreciation and love for ancient world as well.

Personally, I do not consider ancient languages like Latin as "dead" languages. I don't like this description and to be honest - speaking about Greek - even for us that Greek is native language and of course modern Greek is much more different and easy from ancient Greek, the knowledge of ancient forms of our language helps a lot to learn much better, easier and correctly the present form that we speak. And that is true! For example, people of my age had the chance to learn at elementary school the old poly tonic system that comes from ancient Greek. People of my age usually don't make mistakes while writing. People like in my brothers age and younger (my brother is 3 years younger than me) finds it very difficult to write correctly because they were never thought why they should write by this way or the other...

Many academics among other, from time to time, are expressing the opinion and suggest to bring back the polytonic system but as things are in the field of our educational system I am not very optimistic that this suggestion could become reality shortly in present or later in the future.
Posted by Christos Moissidis at 11:55 AM 2 comments:

Its good to know

Liberals are turning their back on the government because its leaders have failed to live up to reform promises. With recent PKK attacks and local elections rapidly apprroaching, the AKP is being criticized for changing direction and embracing the status quo

The ruling party’s shift from a reformist line to a more status-quo stance in the handling of critical political issues has recently seen a visible withdrawal of support from liberals and the Islamist media. This drift in political stance has been marked on many occasions by Prime Minister Recep Tayyip Erdoğan, who recently adopted more nationalist language and pro-state and pro-military policies on crucial issues, including the Kurdish issue and the military’s role in politics. He has failed to present himself as a leader who once promised European Union reforms, resulting in attacks from even Islamist pundits and pro-government media. "The ruling Justice and Development Party, or AKP, is undergoing a weary period as a result of the closure case and its lack of a global vision. It cannot achieve the fulfillment of expectations [on domestic issues] and a global vision at the same time," Mehmet Altan, chief columnist for daily Star who is known for his liberal views, told the Hurriyet Daily News & Economic Review. The AKPgovernment has raised its nationalist voice prior to upcoming local elections, scheduled to take place early next year, to draw votes, but the real problem has been the government acting in line with the military on most policies and on issues that matter, said Altan."This is a government that does not fight the understanding of the 1982 Constitution made by the military. ’Ankara’ [the army and commanders] is becoming more and more visible in policies, just as they did during the rule of the Motherland Party, or ANAVATAN, the first party to come to the power in 1983, just after the 1980 coup. Ankara should be more globalized," he said.

Among the critics are conservative Yeni Şafak author Fehmi Koru who said Erdoğan had started out as an Obama but has now become a Bush, as well as co-editor-in-chief of liberal daily Taraf, Ahmet Altan, who criticized Erdoğan for leaving aside liberal and reformist policies on EU reforms, the civil constitution and the renewal of the legal system.
"He preferred to be a spokesman for the state more than a spokesman for the public," he wrote in an article.
Surprise meeting
Amid the ongoing tension, Erdoğan and some crucial figures, including those critical of the AKP government such as Altan, came together over the weekend in a surprising meeting at the house of pro-government daily Sabah caricaturist, Salih Memecan. Academics Eser Karakaş and Deniz Ülke Arıboğan and some journalists were present at the meeting, which came amid mounting criticism over the government’s pursuit of a more pro-military policy especially following the terrorist attack in Aktütün in October.
For Professor Eser Karakaş of Bahçeşehir University such a potential transformation should be read within the context of the upcoming local elections. "I am not sure whether the AKP has shown a reversal. But if so, the AKP has done the wrong thing. I think the mayoral elections in March may be influencing such a change," he said.
Echoing Karakaş’s views, Sabri Sayarı of the Sabancı University said the AKP and the Pro-Kurdish Democratic Society Party, or DTP, were looking for more votes in the Southeast in local elections.
Meanwhile, for some Islamist pundits, the AKP has not undergone a radical change on critical political issues, having maintained its line on specific issues from the beginning.
Akif Emre, a columnist with conservative Islamist daily Yeni Şafak, said civilians’ failure to participate in politics pushed Erdoğan to align the government with the military. The AKPwas already in consensus with military policy on some issues, including the Kurdish issue. "The AKP and the military always had a good relationship. It was the same during former Chief of General Staff Yaşar Büyükanıt’s time," he said.
Ahmet Hakan, who came from an Islamist line and now writes for mainstream daily Hurriyet, said the AKP has never become a reformist party since the time they were elected.
"They initiated one or two promising reforms but these were exaggerated by intellectuals. They could not realize the AKP was the same from the beginning," he said. Liberals and reformists believe parties that come to rule with an idealist discourse can carry out important radical changes, but in the end the party cannot maintain unity within itself, said Hakan. He also thinks the liberals and the government had never faced such a clash of opinion.
"Firstly, the government has changed its political stance on the Kurdish issue and insisted on a more pro-state line. Secondly, the AKP has already displayed a reluctant stance in realizing promised EU reforms," he said. The AKP and the military were in-line on the Kurdish issue but then the AKP drew a different, reformist image on the issue due to EU pressure, he said. "But it has returned to its original," he said.

Meanwhile, Deniz Ülke Arıboğan, Bahçeşehir University rector, said the AKP thought a relationship of the government with the Kurdish people could not be established over the DTP, and the contemporary approach by the current Chief of General Staff İlker Başbuğ, paved the way for the government to pursue a more democratic policy on the issue. "Criticism of liberals stem from disharmony between theory and practice," she said.
Posted by Unknown at 10:20 AM 3 comments:

Budapest, Hungary
Posted by Unknown at 7:30 AM No comments: