Nurduran Duman
Posted by Unknown at 8:18 PM No comments:

No-one trusts anyone else within the European Union

No-one trusts anyone else within the European Union

European Union ministers have been attempting to deal with the credit crisis by proposing one guarantee for bank savings after the other. However there is a distinct lack of trust between the member states which has led to an emotionally charged climate.

Not all European Union ministers were present at Monday and Tuesday’s credit crisis meeting in Luxembourg. The Belgian finance minister was in Paris to negotiate a second plan to save the Dexia bank.

His German colleague left in a hurry as his country’s second largest mortgage bank, Hypo Real Estate, wobbled on the point of collapse. And the finance ministers from the remaining euro-zone countries had spent the days preceding the meeting announcing one savings deposit guarantee after the other – for their own citizens, that is.

The European Union’s policy of economic integration has been relatively successful during periods of prosperity. But now that the financial markets are in danger of collapsing, EU solidarity is being put to the test. The EU guarantee for savings accounts which the ministers finally succeeded in agreeing to shows how difficult it is to create economic union when there is no political unity.

More to read herreee
Posted by Unknown at 6:10 PM No comments:

Ever wanted to be a banker? A broker on a stock exchange market?
And you are not afraid for a global recession? Are you afraid that China will take over your country? Here an interesting story, written the end of September.
And don't forget, today is World Disaster Day!
And you only have to read a book about G.W. Bush, published in 2000, which gives you more insight in what's going on right now; James Hatfield, Fortunate Son: George W. Bush and the Making of an American President, (1999) ISBN 1-887128-84-0 .
Posted by Unknown at 3:11 PM No comments:

American Jews can add the "sin of market manipulation" to their transgressions according to allegations made by Hamas.
(Hamas previously has also claimed that Israel's sins include staging the Holocaust by manipulating the mass murder of handicapped Jews in Europe in order to prevent having to support them...)
In fact, I was waiting on such a comment made by Hamas spokesman Fawzi Barhum...
They don't stop entertaining me...
But on the other side, its sad and sickening to hear these notorious anti Semitic idiots talking, and I bet you, lots of Arabs thinks like that.
Posted by Unknown at 10:45 AM 11 comments: 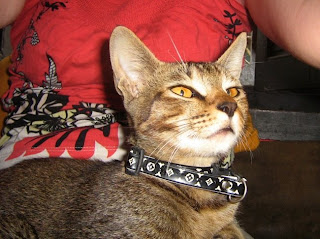 Cats are the same, obstinate and lovable creatures all around the world. This is Prince (I can't remember the Nepali name anymore! This is the translation, who knows it can say it!), the cat of a Nepali friend of mine. He reminds me of lots of things. In Nepal he remembered me of my own cat, here in Holland he remembers me that I have to go back to get to know both him and his owner better... Meanwhile this is a good bridge to end the cats-story and start to tell about this cat's home country with which I fell in love...
Posted by Eva at 12:49 AM No comments:

Elizabeth Taylor
Posted by Unknown at 12:02 AM No comments: