The right to Squat 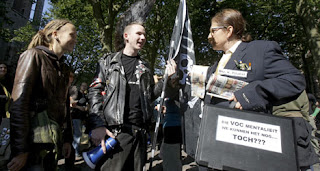 The warm sun last Saturday drew many people to the city centre of Utrecht. But the crowd was divided; one group came shopping or to enjoy a cold drink on a terrace. Another group, colourful, a bit smelly and less conventional than the first group gathered around the Dom tower to express their opinion. One that’s not shared by the mainstream mob, but has deep roots in Holland’s history: to protect the right of squatting.

The current government looses its patience and presented a proposal to make squatting a crime. These crimes are based upon two grounds. If one occupies a house without the owners’ permission and doesn’t want to leave the house when requested or when one uses threads or devices that can frighten others. Chastisement: a fine of the third category which can be up to €7.400 or four months in jail. These punishments can rise when two ore more persons are involved.

The roots of this right go back into the seventies and eighties when housing shortage was high. Many houses were kept empty to be sold later for more money. A new regulation came: when a building hasn’t been used for more than twelve months and the owner can’t give prove that it will be used in a short term, the squatter has the right to stay. Squatters claim this right by overtaking a building, not owning it.

But opinions are divided nowadays. The use of violence and the way that some of the buildings are being abused leads to disapproval of this idealistic form of living. And not without reason: some of the squatters have problems either personal or with justice, don’t want to work and misuse drugs and alcohol. But don’t think that every squatters house is like that. On the contrary: many fulfil a social function or come up for people with lower income. Good initiatives arise where it’s too expensive if this was done in a rented building. Take the yieldshop, an initiative where people can leave their unwanted goods that still can be used so that others can re-use it. Or squatters restaurant, beautiful food for only three euros. The possibility to express an opinion, to make music, to perform, to exhibit movies that don’t have the financial opportunities for an art house cinema.

So hundreds of squatters and sympathizers from all over Holland gathered that sunny Saturday to conserve this tradition. To give a voice to an ideology that’s still very much alive and used by more people than the Dutch government realises. And of course to enjoy that last beautiful day together. 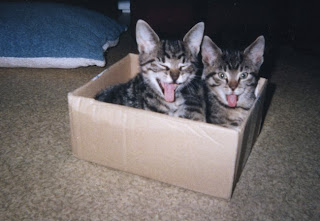 Crisis highlights how powerless Brussels is

Neelie Kroes, European commissioner for competition, came into the Brussels press room yesterday carrying a basket full of candles and paper plates.
“We have dismantled a paraffin cartel,” she announced proudly. “Ten companies have been fixing prices of paraffin products like these for the past 13 years. But the European Commission has taken action. We have fined them 676 million euros in total.”

That same moment in Paris, French president Nicolas Sarkozy was showing another sort of toughness. As the global financial crisis threatened one European bank after another, Sarkozy, currently chairman of the European Union, called government leaders to a meeting.
He was testing opinion about plans to set up a European fund to protect bank account holders in all 27 member states. The French proposed other European measures to stop the financial wounds from bleeding.

A European watchdog for banks operating across borders? A temporary freeze on European rules governing state support for industry? No one has any idea what works and what does not. That is why Paris has so many ideas on the go.
The contrast between what Brussels and Paris are doing could not be greater. National politicians are making European policy on the financial crisis. And the European Union's day to day management – the European Commission – is dismantling paraffin cartels.
European officials in Brussels are painfully aware of this discrepancy.

Twenty years ago, when the European Commission still had power, its chairman was Jacques Delors. Economic downturn? Delors would come up with a controversial plan, which he had already discussed with government leaders and was promptly accepted by all of them.
But now the European spirit is not a fraction of what it was then. After Delors, government leaders have come up with weaker brethren to chair the Commission. They wanted to take back the initiative.
And that is why the current chairman, Portugal's Jose Manuel Barroso did not appear in public yesterday to announce that he wanted to set up a pan-European fund to save the big banks.
Call Brussels
Instead Barroso appeared in public with the chairman of the African Union and spoke about European aid to Africa to counteract rising food and energy prices. Barroso did mention the panic on the financial markets. He called on member states to please contact Brussels if they wanted to rescue any faltering financial institutions.
He also praised several measures that the Commission is going to put to member states which will increase the supervision of multinational banks and insurers and increase controls on speculation with risky credit. But these measures have been the subject of discussion for years. And they are not an answer to the crisis.

“How many banks can a national government rescue? Germany itself could not prevent Deutsche Bank from collapsing,” said one European diplomat. Deutsche Bank is enormous and active in a lot of countries. In such a case, a European emergency fund, like the one America is trying to set up, would be the best answer.
But, as one European civil servant said: “Such a fund would get its money from tax receipts. And tax is levied at a national level, not at the European level.. why ? Because European countries don't want a European tax, let alone a European fiscal system.”

And that is why individual countries can talk about a fund, but Brussels cannot. Brussels has no say over tax income. And if it does say anything, it is immediately seen by 27 members states as interference, or worse. Ireland did not even bother to tell Brussels first about its far-reaching guarantees for Irish bank account holders.
Neelie Kroes had reason to be furious with Ireland for totally bypassing her. But when she had finished her story about the spectacular paraffin cartel bust, she gently asked governments, without mentioning Ireland, “to continue their practice of consulting the commission when they are confronted with problems that may require state aid to the banking”.
In the meantime, Commission officials are trying to find what Sarkozy is up to in Paris with his fund. This is, said one of them, “how deep the European ideal has sunk”.
Posted by Unknown at 9:57 AM No comments:

Van Gogh Museum at Night
Posted by Unknown at 9:40 AM No comments: