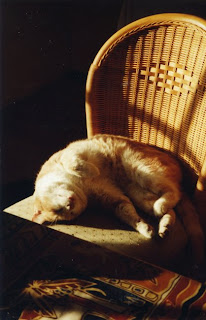 When I was young, I grew up with cats, now I have one of my own and where ever I go in the world, they keep being adorable...

Buckle up your children, you freaks!

Nothing can makes me more angry when I see a little child or even a baby with their mommy in the front seat. While daddy is driving, and speeding, his rotten Tufas, Fiat or third handed Renault's etc. over the roads in Istanbul. Daddy proud with a fake watch, a cigarette in his hands, mommy covered, Allah, and playing with her little baby or child.
Yes, Turkey celebrates Bayram, everything is allowed. But buckle up you idiots. And care about your children, they are not toys. Today I was 4 hrs on the road within Istanbul, and they were everywhere...those idiots. Buckle up please otherwise I will Turkify you as someone did below: throw a Turkey on the car!

Mecca now, Mecca in the future....

View from the plaza

Mecca in the future: the contours of the Vatican only now yankee style...
Posted by Unknown at 8:37 PM No comments:

Of late, fundamentalism- from all possible sides of the faith divide- has marred things- all over India and perhaps more specifically in the city and state I so much love.

I shall use this wonderful platform Internation Musings has provided to talk about Cuisine, Celebrations and Communalism- the things that occupy my mind more prominently at this point of time. However diverse be the faith we follow and the beliefs we believe, all of us converge at one single melting point without exception- food.

All our ambitions boil up to roti, kapda and makaan. For most readers here, the quest may not be so simplified and the march to luxury must have set quite high standards on all the three fronts. For example, I pay my house-help some INR 775/- per month (16 USD) and the cook another 700/-.We don’t bat our eyelids to spend the same amount- their entire month’s salary- on a single evening of eating out. It is precisely for this unfortunate divide, that each one of us needs to be truly grateful for the sumptuous food we can afford to eat.

I grew up to shouts of ‘don’t waste food’ from my Aaji (mother). Her kitchen was, and still remains, an epitome of hygiene, economy and taste. ‘Eat what is made or go hungry’ was a common diktat. Her fanatic exactions have made us respect food even if we cannot measure up one-tenth to her standards or style. It is for her that my taste-buds are not fussy today. Saying no seems awkward and wasting means guilt.

My Aaji is an open-minded person. So while no one at home was allowed to cook non-veg, she didn’t stop us from trying out. ‘I feel it wrong to kill to eat when you have such abundant options. But the decision is yours,’ she says. Her disapproval is subtle and democratic. It is with such a background that I not only grew up to be a first rate foodie, also tolerant and receptive to different cooking styles.

Like I learnt to appreciate the classic Malayalee cuisine at my friend’s place. I first tasted fish here under the watchful eye of my Baba. ‘What if the bone gets stuck in her throat. She eats way too fast,” he said and seriously believed. But aunty just laughed this out. She took the piece bits by bits and literally fed me my first mouthful of fish. Since then, be it Onam or Christmas, I would go there and hog away all the mallu preparations with glee.

Post Eid, I got to sample the most amazing bowl of sevaiyyas at the house of our Urdu teacher. I still remember the breath-taking taste of the spoonfuls of chicken biryani another Muslim classmate’s mother had made.

And how can I miss the kesar-dhoodh aaji boils to perfection for Kojagiri poornima? Or the diyas she makes out of chana-dal for the ‘Jeevti’ puja on the Friday of the Saavan month? Or the Pooran poli for Sankranti?

Cooking is a major part of all festivals and cooking is what has the potential to bring people from different walks of life in one happy union. When we can sample delicacies of different castes and communities with fervour, why can’t we be tolerant to the different modes of thought? Why are we bent on seeing things in black and white? Why is it that a viewpoint has the scope only to fall in two extreme categories today?

I am scared that the way things are going in India, a migrant in Mumbai would soon be forced to eat nothing but pithla bhaat and a north-Indian techie in Bangalore would have to learn and write in Kannada before he ventures out for a job. Only the masala dosa has become ubiquitous. It’s high time that familiarity leaves the boundaries of kitchen and paves way in the minds of people.

One can think right only with a full stomach. All of us here have the good fortune to eat without a worry for tomorrow’s ration. Let us all be a little more broadminded in wake of the recent spate of tension all over the country.

When the Parsi community first landed on a shore in Gujarat, they dissolved sugar in milk and said they would mix with the native population just as easily. The community has remained true to their symbolic word of promise. I suppose it can’t be that difficult for each one of us to follow suit.

-Gauri Gharpure
Everybody wants to be somebody; nobody wants to grow.
-- Johann von Goethe
Posted by Unknown at 1:26 PM 6 comments:

At least two, but possibly five, unknown portraits by the Dutch Golden Age painter Frans Hals (c.1580–1666) have been discovered.

Two works, both portraits of men, were undoubtedly made by Frans Hals, say experts. The other three are still undergoing technical research, but Pieter Biesboer, curator of the Frans Hals museum in Haarlem says he is "almost certain", the paintings are by Hals.
All five paintings are currently undergoing conservation work in the studio of master restorer Martin Bijl.

One of the male portraits, dated 1640, is owned by the Dutch government institute ICN. The four others are owned by private collectors.
The government-owned painting was previously attributed to Hals' students, but Biesboer says he has proved that the face, collar, hand and part of the hat were definitely painted by the Dutch master himself. The painting will be on display at the Frans Hals museum from October 11.
The paintings still under investigation are portraits of a woman thinking, a young violinist and a child.
Posted by Unknown at 8:13 AM 2 comments:


Nurduran Duman
Posted by Unknown at 12:48 AM No comments:

Portrait by Michel Sandre
Posted by Unknown at 12:02 AM No comments: