Two months ago already, it’s hard to believe. And so many things have happened in Nepal. I’ve concurred mountains, lost myself in cultural misunderstanding and found myself again in one of the best experiences in life. Couldn't do what I wanted to do and did things I never expected to do. What has happened to me when I wasn't online? I’ll write about that these upcoming weeks with pictures to go along with.

Here already a hint. Mules are still a common way to transport things. 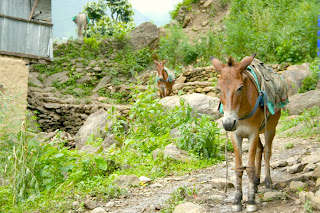 It’s observable that the Turkish power distribution system is not transparent; you don’t know who the driven forces are in this countries and who are behind all those hidden forces. It’s a jungle. Somewhat like the Wild West! I always stay behind my remark once that Turkey has more in common with the USA than Europe. The USA senate counts only millionaires; 90% of the Americans are Christians, many ‘born-again’ and therefore religion plays a main role in USA politics; corruption there is institutionalized and so on. That Emre is following the AK party its dubious role in several money laundering cases is good, Turkey needs independent journalist – here the contrast with the USA where a lot of independent journalist are writing. But today I came across an entry of Jenny White, who I met the last week twice. There is a real power struggle going on, and who plays which role? Read it herreee
Posted by Unknown at 12:17 PM 1 comment:

West of Igdir: Football Game of the Century Recap

West of Igdir: Football Game of the Century Recap
Posted by Unknown at 8:37 AM 12 comments: