Four or 80 wifes of 'the Herd', What's the difference?

I must say, how they apply Sharia law in some districts of Nigeria is done precisely.
And no human or women right groups up in arms, only silence.
We are talking about the 21th century here. Here the story which gave me a good laugh.

An Islamic body in Nigeria has issued a death sentence on a man who married 80 women well above the maximum of 'four allowed'.
The Jamatu Nasril Islam (JNI), one of Nigeria’s top Islamic bodies, said in a statement that Mohammadu Bello Masaba from the central Niger state stood condemned to death unless he divorced 76 of the women in four days (under Sharia law you can do this rapidly, while under Christian 'laws' it take you some time and Catholics can divorce but not re-marry).
“Unless Masaba repents within four days and take only four wives from the herd (women are sheeps, cows?) he remains condemned to death, according to Sharia law,” the statement said.
“Any Muslim who married more than the approved number of wives at a time either by mistake or out of ignorance (..) is instructed to choose but only four and ask for Allah’s forgiveness,” the group said.
Since the return of Nigeria to civil rule in 1999 a dozen predominantly Muslim states in the north have re-introduced a strict version of the Islamic Sharia legal system.
Sharia law is often seen as more efficient and less bureaucratic (I bet you it is) and corrupt than Nigeria’s secular courts.
The northern states pride themselves on applying a mild form of Sharia, with no deaths by stoning carried out and few amputations (I have some pics of amputation in stock, for later...its Sunday today).
Posted by Unknown at 12:34 PM 9 comments: 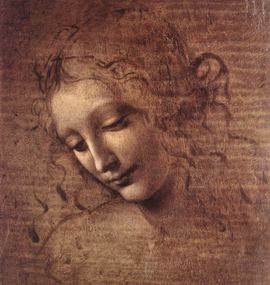 "Female Head (La Scapigliata" by Leonardo da Vinci.
Posted by Sandra Singh at 12:32 AM No comments: